Brooks Koepka posted a mysterious video on his social media platforms ahead of his match against Bryson DeChambeau in Las Vegas. 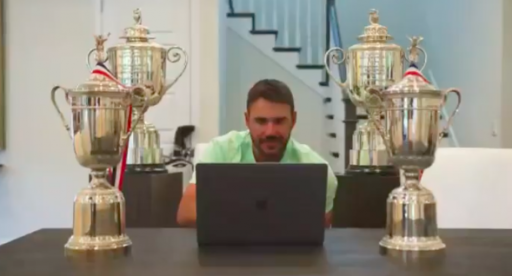 Brooks Koepka has officially started the mind games with Bryson DeChambeau ahead of The Match on November 26 in Las Vegas.

Koepka and DeChambeau underwent a feud during the 2021 PGA Tour season. But now all is well and they are facing off in a 12-hole match at The Wynn Golf Club in Nevada.

The Match will be presented by Capital One and broadcast by TNT and it will be very interesting to hear the camaraderie and discussions that the players have.

Koepka looks to have opened fire on DeChambeau in their psychological warfare ahead of their showdown, as he posted an intriguing video on his social media platforms yesterday.

In the video, the World No. 13 is sitting in front of his laptop and he is surrounded by all four of his major championship trophies. Not that he is rubbing his success into DeChambeau's face or anything.

He captioned the video: "Digging up all the dirt I need… “Course prep” for Nov. 26th."

It is hard to decipher what the 31-year-old means and what dirt he intends on digging up. We assume all will be revealed when The Match comes around.

RELATED: BRYSON DECHAMBEAU RESPONDS TO LETTER SENT IN BY HIS BIGGEST YOUNG FAN

It will be the fifth edition of the popular fixture which has seen a mixture of both golf stars and the stars of other American sports. Tiger Woods, Phil Mickelson, Tom Brady and Charles Barkley have all played in previous renewals.

This is the second time that The Match has been contended in a singles format and over less than 18 holes. Whatever Koepka has up his sleeve, we are all excited to see what happens on November 26.

NEXT PAGE: IN MAYAKOBA, MATTHEW WOLFF SIZZLES AS ANOTHER PLAYER STARTS WITH A HOLE-IN-ONE