Francesco Molinari had BAD BACK when going 5-0 at 2018 Ryder Cup!

Molinari reveals he was injured while going 5-0 at Le Golf National last month. 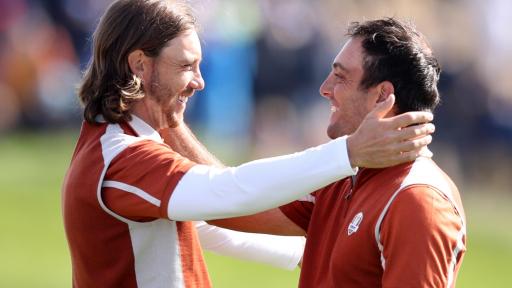 Francesco Molinari has revealed he was carrying an injury despite winning all five of his matches at the Ryder Cup at Le Golf National two weeks ago.

Molinari, 35, won all four of his fourballs and foursomes matches alongside European team-mate Tommy Fleetwood, before going on to beat Phil Mickelson in the singles.

The Italian said he began to feel the effects of a long summer on Saturday morning at the Ryder Cup but didn’t tell European captain Thomas Bjorn of his deteriorating condition.

“It was just getting tired,” said Molinari, speaking during this week's British Masters at Walton Heath. “At that stage it wasn’t enough to really compromise my golf.

Golf rules: Can I replace my club if a crab snaps it?
Manolo Vega outraged by spitting on the green in 'best' post yet

“I just started taking some anti-inflammatories. It’s a week that you’re sort of pumped up with adrenaline, anyway, that you could probably play on one leg.

“My bad back at the end of the Ryder Cup was not great. On Monday, I couldn’t do my shoelaces. I’m not a kid like Tommy. I need to manage my energies and my bodies.”

A video of Molinari and Fleetwood sleeping in the same bed went viral the morning after Europe trounced United States 17.5-10.5. Watch here.

Molinari and Fleetwood are playing alongside each other at Walton Heath this week, with the Italian opening with a lacklustre 1-over 73. The Englishman fared much better, however, racing into a tie for the lead on 5-under.