Furyk on Tiger's Ryder Cup chances: We'll treat him like everyone else 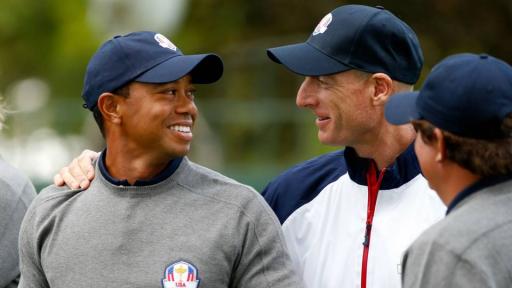 United States Ryder Cup captain Jim Furyk has revealed Tiger Woods will be treated no differently to everyone else vying to make the 12 places on the US Ryder Cup team for their biennial clash against Europe at Le Golf National this September.

Woods moved up to 20th from 31st in the US Ryder Cup standings following his tie for sixth at The Open on Sunday.

With just two tournaments remaining until the automatic eight qualify for Furyk's side, Woods, as things stand, will need to rely on one of four captain's picks - but Furyk is very much keeping his cards close to his chest.

''I'm going to handle him the way I do everyone else,'' said Furyk.

''I'll ask my top eight guys. The way he's playing, he might be one of them. I'll ask the vice captains, collectively, and I think we'll do the best we can to round out the team. We want the guys playing the best.''

Woods wlll have a chance to pick up some much-needed Ryder Cup points at the World Golf Championship and US PGA Championship in August.

The seven-time US Ryder Cup player and 14-time major champion has already been appointed an assistant captain, just as he was at Hazeltine two years ago.

Woods has played in just 12 events that offer Ryder Cup points, about half as many tournaments as most American prospects.

''We had a lot of guys in pretty good form,'' added Furyk, of the American performances at Carnoustie last week.