Georgia Hall won the Women's Open at Royal Lytham and St. Annes in 2018 and she now finds herself in the final group for the third round in 2021. 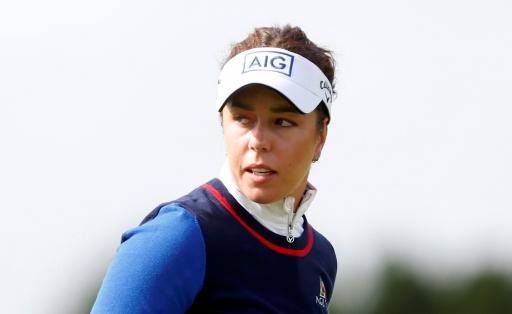 Georgia Hall shot a solid score of 3-under-par in the second round of the AIG Women's Open to share the 36-hole lead with Mina Harigae.

Hall, who has made recent top-10 finishes in the Meijer LPGA Classic for Simply Give and the Amundi Evian Championship, began her day on 4-under-par after her 68 on Thursday.

The 25-year-old made four birdies in her opening 10 holes to reach 8-under-par for the tournament, but she made a bogey on the par-4 11th hole and a damaging double-bogey at the par-4 15th hole.

The World No. 43 finished with a 69 and sits on 7-under-par heading into Saturday, alongside the American Harigae who shot a fantastic 5-under-par 67 on her second day at Carnoustie.

Things are heating up at @carnoustiegolf

Check out highlights from the morning wave at the @AIGWomensOpen

World No.1 Nelly Korda failed to build on her score of 5-under-par on Thursday. She carded a round of 1-over-par, with three bogeys and two birdies, to fall two shots behind Hall and Harigae.

The young American has been in superb form recently on the LPGA Tour, winning the Olympic gold medal, the KPMG Women's PGA Championship and the Meijer LPGA Classic for Simply Give.

The US Women's Open champion Yuka Saso carded a 71 on the second day in Scotland to move to 5-under-par for the tournament.

The impressive 20-year-old has performed beyond her years on the LPGA Tour this season. Inspired by Rory McIlroy, she became the first player from the Philippines to win a golf major at The Olympic Club in San Francisco.