Golf fans react as airborne ball is STRUCK BY LIGHTNING at TopGolf in America!

We are just thankful that no one was hurt when the lightning struck the ball. 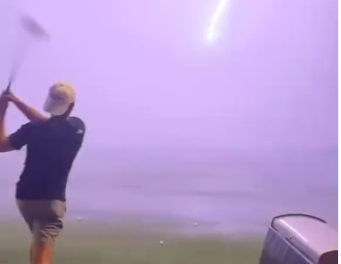 In extraordinary footage taken from Tiktok, a boy's golf ball was struck by lightning at a Topgolf driving range during a storm in Texas.

Tomas Enrique Gomez, 18, is seen hitting a ball during a ferocious rainstorm when suddenly, it was struck by a massive bolt of lightning.

Gomez was visiting the San Antonio driving range with his brother Andres and his sister Natalia. Their three friends Madison, Michael, Jerry were also present and Arlette Ibarra, 15, was responsible for catching the moment on her phone.

The incident occurred just as Tropical Storm Elsa ripped through Georgia and the Carolinas on Thursday, causing flooding and tornadoes near the coast.

"When I saw the lightning bolt my first instinct was to run," Gomez said to the Daily Mail.

"I slipped on the wet floor and was just happy I caught myself. I was just glad that it (lightning) hit the ball instead of me."

Topgolf told the Daily Mail that although they didn't ask guests to evacuate the entire building, they did ask everyone to move inside following the lightning strike.

"You sure that golfer wasn’t Thor," one fan said

"I feel like this is better than getting a hole in one," one fan commented.

"$100 bucks if you find me that ball!" another fan commented.

"TopGolf just got a whole lot cooler during Thunderstorms," one fan said.