A hilarious video has come out of a golfer who was getting a hard time from his wife about the amount of golf that he plays. 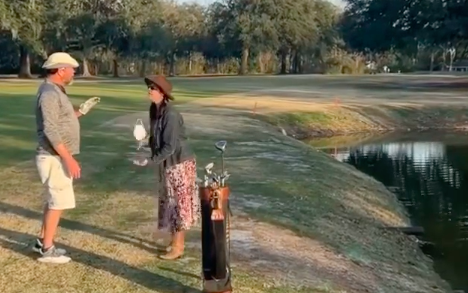 Golfers can feel very much at home on the golf course, almost more at home than in their own house with their own family.

In a video that went viral on social media, a husband and his wife were having an argument about how much time the husband spends on the golf course, which by the looks of it is far too much.

The wife claimed that her husband plays golf every weekend and he never spends time with her, in what was an angry and aggressive rant that was being filmed.

Despite being shouted at, the man was still determined to finish his round and asked his wife if he could hit his next shot, but this incited even more anger.

She even described herself as "a golf widow" and clearly wanted her husband to quit his obsession, but we all know how hard that can be.

Golf fans on social media commented on the video:

"Let me just hit this shot hahaha," one fan said.

"I think this Karen needs to be thrown in the water rather than those Spaulding gamers," one fan commented.

"Why I’ll never get married lol," another fan said.

"She seems terrible....." another fan commented.

"Hahhahaahhaaahhaha best one so far," one fan said.

Unfortunately for the person who was filming the argument, the wife began directing her frustration towards them.

Arguably the best part of the video is when she throws her husband's clubs into the water. That's where the footage ended, but the video received a lot of laughs from many golf fans who can probably sympathise with this situation.