Dustin Johnson took the week off at the Wells Fargo Championship and spent the weekend at home with his partner and family. 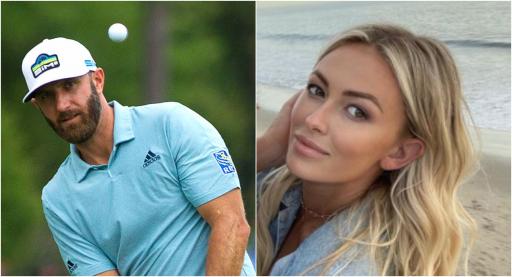 Dustin Johnson celebrated Mother's Day on Sunday with his partner and model Paulina Gretzky and their family.

Gretzky posted a picture on her Instagram page which included her parents, Johnson and the couple's two young sons.

RELATED: DUSTIN JOHNSON WITHDRAWS FROM THE BYRON NELSON - WAS IT TO DO WITH HIS OUTRAGEOUS BACKFLIP OFF A BOAT WITH PAULINA GRETZKY?!

Johnson did not play in the Wells Fargo Championship this week in North Carolina, having come tied 48th at the Valspar Championship last week.

Gretzky, who is the daughter of NHL legend Wayne Gretzky and his wife Janet, provided a welcome update of the couple's whereabouts and it was great to see a picture of their whole family together.

"I needed this outfit yesterday," one fan said.

"Happy Mother’s Day!! Obsessed with you in pink," one fan commented.

"Quite the outfit for Mother's Day brunch!!!" another fan said.

"What a beautiful picture!" another fan said.

"Happy Mothers Day to all the Moms out there! WAYNE, you're a truly blessed man! Canada loves the whole Gretzky Clan!" one fan said.

Johnson and his partner Gretzky, who started dating in 2013, are clearly a popular couple amongst golf fans and this shows by the number of followers she has on social media.

Gretzky has 996,000 followers on Instagram, which is arguably down to her career as a model as she often posts pictures of her photoshoots online.

Earlier this year, Johnson and Gretzky made headlines when they sold their stunning house in Florida for $16.5 million, making a healthy profit of over $11 million.

NEXT PAGE: RORY MCILROY HITS IT OVER 370 YARDS DOWN THE 2ND HOLE AT WELLS FARGO!