We all have our own way to prepare for our shots, but this is something that we have never seen before... 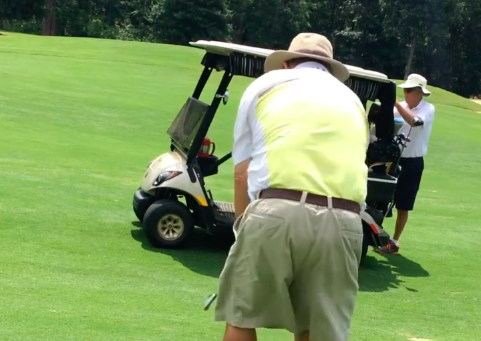 Pre-shot routines are very important to your concentration and the manner in which you get comfortable for your next shot.

We have seen some fantastic and popular pre-shot routines on the PGA Tour, such as former PGA champion Jason Dufner and his famous waggle routine.

Well, we have found something similar to Dufner's pre-shot set-up but instead, this one is much more mad and extraordinary to watch.

It is not only the way in which the man waggles his club in a wild and funny style, but he also shuffles his feet and his body in order to get comfortable for his shot.

His routine almost resembles a type of dance and it looks as though he is not being serious, but he continues to hit his shot and his playing partner also carries on in the background as if everything is normal.

"Is that Mumble from Happy Feet??? Oh Lordy…" one fan said.

"Wow, this guy is good," one fan commented.

"Not once looking at his target through all of those yips lol love it," another fan said.

"Wow that’s bad jitters. I’d be beating him early so I didn’t have to watch that," another fan commented.