John Daly was filmed singing once again, but this time with some pretty impressive company. 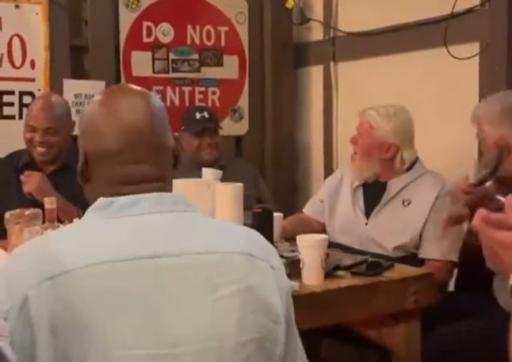 John Daly has gone viral once again and no, not for some shirtless 350-yard drive, but for his vocals, where he teamed up with some pretty impressive company to sing a song.

He's always been a crowd favourite and although Daly isn't on the PGA Tour anymore, he still grinds it out on the Champions Tour.

After finishing in a tie for 10th at the Regions Tradition at Greystone Founders Course, Daly enjoyed some down time with former NBA superstar Charles Barkley and two-sport All Star Bo Jackson, who both competed in the Pro-Am earlier this month.

The trio were filmed singing together whilst sat around a table and golf fans are absolutely loving it.

WATCH DALY, BARKLEY AND JACKSON IN THE CLIP BELOW:

"I would rather hang out with this group than any other celebrity group," said one golf fan.

"Chuck has a voice the combination of Fergie and Jesus," said another, using a quote from the hit comedy film Stepbrothers.

"Chuck with the finish! Imagine being at that table."

It's not the first time that Daly has been filmed singing, with a recent video going viral of the 55-year-old singing a Bob Dylan classic, which once again caused a brilliant reaction from golf fans in the comments.

Barkley, who made a name for himself as one of the greatest Power Forwards in NBA history, is a popular figure amongst golf fans and was recently praised for making some changes to his rather unorthodox swing.

NEXT PAGE: CHARLES BARKLEY HAS A NEW SWING AND GOLF FANS ARE LOVING IT