Today marks 10 years since we lost one of the greatest golfers of all time. 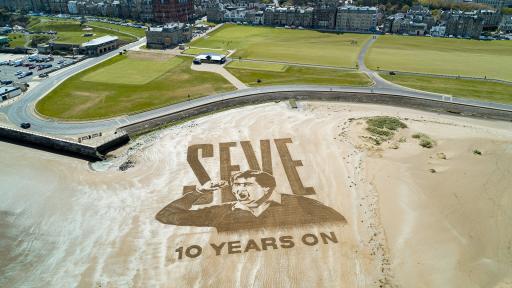 The Open has paid tribute to Seve Ballesteros with a stunning piece of sand art to commemorate the 10 year anniversary of the golf legend's death.

Ballesteros was one of the most magnificent golfers to ever grace our sport and he is remembered not only for his extraordinary talent, but for his wonderful personality.

The Spaniard was taken far too soon, but his memory lives on and he has inspired thousands of golfers, some of which are now some of the best players on the planet, such as Jon Rahm.

The Open Championship was a tournament where Ballesteros really came alive and although he was never a "home favourite", the crowd always treated him like he was.

Ballesteros captured three Open titles during his career, the first coming in 1979 at Royal Lytham & St Annes, where he beat Ben Crenshaw and Jack Nicklaus by three shots, to lift his first major trophy.

Two Masters victories would come before Ballesteros claimed another Open Championship, lifting his second Claret Jug at the home of golf at St Andrews in Scotland in 1984, with a two shot victory over legends Bernhard Langer and Tom Watson.

In honour of Ballesteros' incredible legacy, the Open paid tribute by creating a spectacular piece of sand art on the beach of St Andrews and golf fans flooded the comments section to applaud the touching gesture.

"This is simply amazing. Thank you so much," said Carmen Ballesteros, daughter of Seve.

" I had the privilege of playing with the great man many times. He is the Mozart of golf. He painted a picture in his head and played that masterpiece," commented Wayne 'Radar' Riley.

NEXT PAGE: Rickie Fowler provides Tiger Woods update after watching The Masters together