Golf fans react as a player's ball STOPS next to a SNAKE!

Would you try and reclaim your ball if it stopped next to a snake? 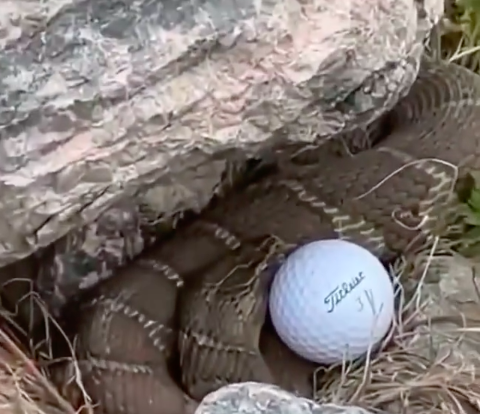 On the golf course, your ball can finish in almost any absurd situation if you hit it where you don't intend to.

In the United Kingdom, it is unlikely that your ball will settle next to a potentially dangerous or venomous animal, but in other countries, this could well be the case.

On the PGA Tour, we have seen alligators walk across the course in certain parts of America, much to the amazement and fear of many patrons.

One golfer experienced some terrible luck when he approached his ball and found that it had stopped next to a snake that was curled up underneath a rock.

Snakes can be threatening and scary animals, especially if they are confronted in unexpected circumstances, such as when you are trying to enjoy an average round of golf.

We don't know what the golfer dared to do to get his ball back, but it would take a very brave person to try and reclaim their ball from next to such a threatening animal.

"I'm not losing a Titleist that I can see. Lol...Give it a little tap and he'll be on his way to another sunny spot," one fan said.

"15-foot ball retriever getting some work in," one fan commented.

"Is that a rattlesnake protecting its egg? I’m taking a drop and losing that $3 ball," another fan said.

"Just slither a little ssssstinger back into play," another fan commented.

"Happily taking a drop and donating that ball to that snake," one fan said.

NEXT PAGE: "AM I EVER GOING TO ESCAPE THAT QUESTION?": JON RAHM ASKED ON TEMPER AT US OPEN