Justin Rose made golf fans feel a lot better about their game at the 3rd hole of Tiger Woods' new course. 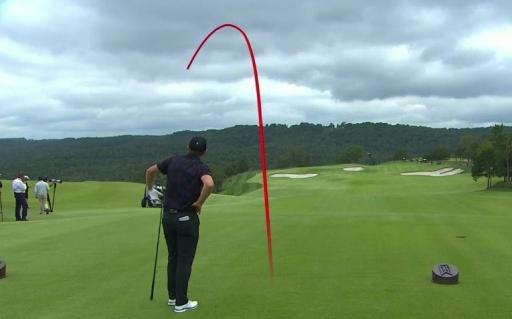 Golf fans could all relate to Justin Rose on Tuesday at the Payne's Valley Cup, when he hit one of the worst drives of his career during an exhibition match to unveil Payne's Valley Golf Club.

Rose was playing alongside Rory McIlroy as the two took on Team USA's Justin Thomas and Tiger Woods in what resulted in a fantastic and entertaining match up to celebrate the opening of the new public course designed by Woods himself.

The match finished 2-2 after 18 holes and was settled at the incredible par-3 19th hole, where Thomas stuck his ball closest to the pin to secure the victory for Team USA.

We were treated to some incredible shots during the event, but Rose became a talking point on social media for all the wrong reasons with his attempt at hitting the green from the tee at the par-4 3rd.

Rose was trying to play a high cut with his driver, when he hit one of the biggest double-crosses you're likely to ever see. Watch the shocker of a drive in the video below:

Of course there was no real pressure on Rose and if this was a real tournament he probably wouldn't have gone for the green, but everyone - including Rose - had a laugh about the shot.

Rose smiled and replied: "That was not a high cut."

Golf fans quickly took to Twitter to relate to Rose, who made most of us feel a lot better about our golf game, even if it was for a brief moment.

Tiger: "You see guys, I wanted these fairways to be really wide to make the course playable for golfers of all skill levels"

Justin Rose is all of us. In front of Tiger, JT and Rory he snap hooks a drive off a cliff while the other 3 drive the green. “Well that wasn’t the high fade” he says #relatable

Justin Rose out here trying to impersonate me on the tee box pic.twitter.com/4j12n7IelS

I an better than Justin rose then https://t.co/dDmdac8HOk