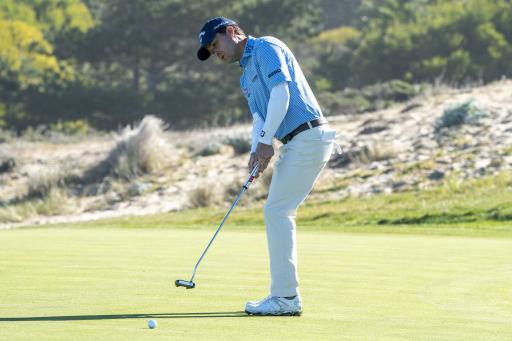 Kevin Kisner has caused a social media stir after a video went viral of his unorthodox putting drill on the practice greens at last week's Wyndham Championship at Sedgefield Country Club.

We see all sorts of different drills that players use to prepare them for the tricky greens on the PGA Tour and it wasn't long ago we even saw Phil Mickelson using a driver to help his putting game.

Warming up for his round playing alongside Englishman Paul Casey and American Ryan Brehm, Kisner was spotted on camera putting himself through the paces with his putter, but doing so using quite a bizarre training aid. Watch the video below to see what all the fuss was about:

@kevin_kisner with a unique training aid

Attached to Kisner's feet were 'Chango Balance Paws' that are designed to help with proprioception and improve your 'dynamic balance' and the World No.34 has been using the unique balance pads for some time now, but it seems not many golf fans had seen him use them before.

Now although the majority of golf fans were quite disturbed by the Chango Balance Paws and many were quick to ridicule Kisner for them, we feel it's important to remind readers that Kisner's putting is one of the strongest parts of his game.

Kisner currently ranks 19th in the PGA Tour Strokes Gained Putting statistics and since 2014 he has finished 21st, 45th, 3rd, 30th, 12th and 20th in that statistic.

It's obviously a drill that helps Kisner, although reading through the comments on Instagram, it's safe to say most golf fans didn't approve. Check out some of the replies below, or click on the Instagram video to see more.

"Greenskeepers hate him for this one simple trick."

"Are they Kamala Harris’ knee pads?"

“If Ben Hogan saw that he would puke.”

"Talk about over thinking things! Seriously."

"How am I supposed to chip with that going on, Doug?!"

"Ummm... Your body is at a different height, so spine angle and arms draping will be different than normal."

"This is something you keep for the backyard putting green."