Golf rules: Are you allowed to line yourself up with your golf club?

If you are next to the green and lining up a chip like this golfer, are you allowed to place your club on the ground and use it as an alignment aid? 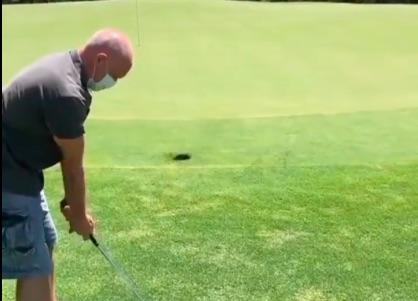 The rules of golf are arguably the most complicated and complex set of guidelines of any sport, so much so that PGA Tour players often require the assistance of rules officials.

During the final round of the US PGA Championship last week, Will Zalatoris needed a rules official to determine where he could drop his ball after finding the bushes on the par-3 6th hole at Southern Hills.

It took the 25-year-old over 15 minutes to play the hole to make sure that he followed the rules correctly. Even the best players in the world need clarification.

In the video below posted by golfrules_questions on Instagram, a golfer puts his club down as an alignment aid as he prepares to chip his ball on the green.

Related: Rules of golf: Did you know this rule about clubs being damaged in your bag?

The man uses his own golf club to line up his shot, which looks reasonably harmless and a good idea to help his short game. But are you allowed to do this?

The answer is no. This would incur a two-shot penalty as the player has used his golf club to line up his feet and body. This is according to Rule 10.2b (3).

The USGA rules of golf website states: "No Setting Down Object to Help in Taking Stance. You must not take a stance for the stroke using any object that was set down to help in lining up your feet or body."

"If the player takes a stance in breach of this Rule, he or she cannot avoid penalty by backing away from the stance and removing the object."

It is important to be aware of as many rules as possible. You don't want to mistakenly break a rule such as this and cost yourself a couple of shots in a competition.

Next Page: Bryson DeChambeau FORCED OUT of Charles Schwab Challenge at Colonial