Rules of golf: Did you know this rule about clubs being damaged in your bag?

If your clubs get damaged in your bag through no fault of your own, are you allowed to replace them with new ones according to the rules of golf? 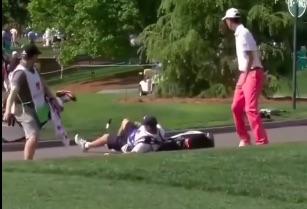 The rules of golf are a very complex set of guidelines that we all do our best to abide by, but it is hard to know every single page of the rule book.

There are some rules that represent the fundamentals of the game such as lost balls, unplayable lies and marking your ball on the green.

But as you see in both the professional and amateur spheres of the sport, there are always rules controversies that PGA Tour and DP World Tour officials have to deal with.

One rule of golf that we want to discuss with you is damaged clubs in your golf bag and what you can and can't do if you find a damaged club in your bag.

If you look at this footage above posted by golfrules_questions, the caddie has taken a tumble and the head of the golf bag has clattered on to the floor.

Interestingly, the answer is no. The player cannot find another club to replace it during their round, but they may continue to use it or attempt to repair it.

Rule 4.1b (3) states: "If a player started with 14 clubs or added clubs up to the limit of 14 and then loses or damages a club during the round or while play is stopped under Rule 5.7a, the player must not replace it with another club."

A local rule could allow the player to replace their club but according to the standard rules of golf, this is not the case. Although this video shows a rare occurrence, it is important to know this rule.

Next Page: Should TPC Craig Ranch be a PGA Tour venue? Golf fans have their say...