Golf rules: Can I place my club on the floor for to help alignment?

Golf rules: Can I place my club on the floor for alignment? This is great for the range but what about on the course? 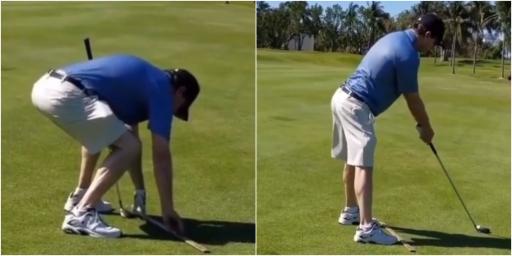 There are so many different legal ways you can align to the ball that do not infringe upon golf rules.

How many times have you been told to stand behind the ball and visualise the shot?

Pick out a target, and create a line in your head going straight back to the ball.

From there, pick out an intermediate target. We've heard it all before. It's a great tool to really help.

Even the best players in the world struggle with their alignment from time to time and need a reset.

Obviously, amateur players will do anything and everything to make sure they can aim straight. Myself included.

One of those includes using their club or an aligment stick for help. Great for the range, but is this allowed on the course?

Related: Did you know about this unique golf rule?

So the answer to the question is: no. This is not allowed as per the rules of golf.

This would be consider breaching Rule 10.2b(3).

It would mean that a general penalty is incurred and a loss of hole in match play while two strokes in stroke play.

A penalty is still incurred if you take a stroke with the offending object down, then reset your stance after removing the object.

Oh, and you're also not allowed to mark a line out in the grass, so don't get any ideas.

Did you know this about golf rules?

During a round a player must not