Tiger Woods hit one of the unluckiest shots in the history of the PGA Tour at the 2020 Farmers Insurance Open. 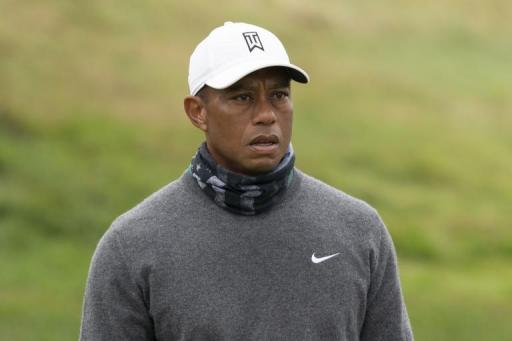 Tiger Woods has won at Torrey Pines eight times during his legendary PGA Tour career, none more memorable than when winning the US Open practically on one leg in 2008.

Woods also landed seven victories at the Farmers Insurance Open, or Buick Invitational as it was known when Tiger won it.

WATCH: DID JON RAHM JUST TELL A PGA TOUR COMMENTATOR TO "SHUT THE HELL UP"?!

You could therefore say Torrey Pines owes him very little given his success on this San Diego gem.

But one shot that most definitely got away from him on the iconic course was when his ball somehow failed to go down for an eagle-two on the par-4 2nd hole during his final round at the 2020 Farmers Insurance Open.

Woods skipped his wedge into the green and it took one bounce, went into the cup and bounced out.

Unfortunately that doesn't count as an eagle-two, but it was the simplest of birdies.

Torrey Pines is one of three venues, along with Bay Hill and Firestone, on which Woods has won eight times on the PGA Tour.

Woods has won 82 times on the PGA Tour, which shares the record with late great Sam Snead.

The 15-time major champion remains on the sidelines despite competing in the PNC Championship at the end of 2021 with his son Charlie Woods.

RELATED: TIGER WOODS MIGHT NOT BE BACK UNTIL THE 2022 PNC CHAMPIONSHIP, SAYS FRIEND

According to Woods' close friend and former PGA Tour winner John Cook, we might not see Woods in competitive action until the 2022 PNC Championship in December.

Woods has made his intentions clear that he would love to compete in the 150th Open Championship at St Andrews in July.

NEXT PAGE: TIGER WOODS TO RETIRE AT THE OPEN CHAMPIONSHIP?