Golf rules: This player hit a BIRD with his tee shot, but what happens next?!

We've seen some peculiar things happen on golf courses over the years but what are the chances of this? 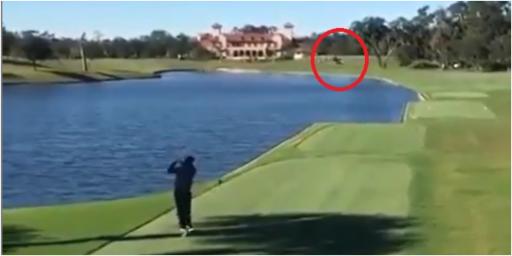 Here at GolfMagic we have seen our fair share of bizarre things on the golf course over the years.

From ridiculous putts, hilarious shanks or shots you wouldn't think were humanly possible.

But what happens when you hit a bird with your tee shot and what are the chances of it happening?

It happened to one player recently and it was all caught on video and posted on the popular @golfrules_questions Instagram page.

The video has been viewed and shared thousands of times with golf fans expression their opinions on this ridiculous video.

It is a stunning golf hole and the player is clearly trying to play a nice, tight draw over the water leading up to the clubhouse.

He takes his address, looks up once and lets it rip with the big stick only to hit the bird and the ball flies into the water.

His playing partners find this hilarious.

We're not sure it's that funny as an innocent creature is being harmed by a golf ball going at that speed.

But what happens next?

The answer is that the ball is to be played as it lies or because it is in a penalty area the player can take the relief options.

That include go back to their last place played.

Or, drop within one club-length of a reference point, that is on a line back from the edge of the penalty area where the ball crossed.

They could also drop within two club-lengths of where the ball last crossed the edge of the penalty area no nearer the hole.

RELATED: WHO IS CHARLEY HULL MARRIED TO?

NEXT PAGE: KIM GIVEN CONTROVERSIAL PENALTY AT CJ CUP

PGA tour
european tour
golf rules
instagram
Tiger Woods
Previous
Seonghyeon Kim victim of CONTROVERSIAL PENALTY STROKE in final round of CJ Cup
Next
Can you perfect the impossible "FLY IT IN THE SOLO CUP" challenge?