Golfer shoots 59 then jumps straight into the lake

Michael Caan cards incredible round of 59, then celebrates in style... 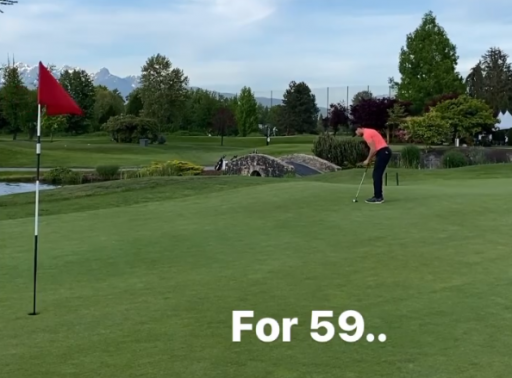 It might not have been a 59 on the PGA Tour, but it will go down as the greatest putt and celebration for golf's magic number of all time.

Caan, who took to social media to show off his scorecard, made five birdies and two eagles on his final 10 holes to shoot 59.

“To non-golfers this number won’t mean much, but if you know... then you know,” Caan posted on Instagram post.

“This could be my only chance to ever shoot 59 and it was one of the best golfing experiences of my life.”

He added: “I’m so happy to have done this with a great group of guys. Thank you guys for capturing a life long memory!”

His round, and thankfully for our viewing pleasure, was highlighted by a stunning 40-footer for eagle at 18.

Caan was on the move early and as the ball dropped, celebrated by throwing himself into the lake.

WATCH CAAN SHOOT 59 AND JUMP INTO THE WATER

Furyk has also gone one better with a round of 58 at the 2016 Travelers Championship.