Golfer uses wedge to SCOOP the ball towards the hole, but what's the ruling?

Another video from the popular Golf Rules Questions Instagram page revealing the answer to this rules scenario. 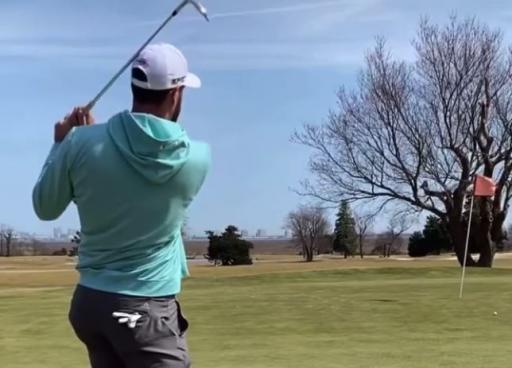 Another video went viral on the Golf Rules Questions Instagram page, this time of a golfer using his wedge to scoop his golf ball into the air and towards the hole, but what's the correct ruling in this situation?

It's not something you see very often, but it's always useful to enhance your knowledge when it comes to the rules of golf, as there's plenty of them and a lot of them can often catch you out.

Personally I was pretty impressed with the amount of control the golfer got on his scoop, but if he was to pull it off in a tournament or a match, he'd pay the price.

WATCH THE SCOOP RULING IN THE VIDEO BELOW:

As always, the popular rules page provided the answer to what the correct ruling would be in this scenario.

"Answer: The player ‘scooped’ his stroke. So the player adds a two stroke penalty in stroke play (total 3), loss of hole in match play. Rule 10.1a."

Let's take a look at what the rule in question says on the R&A website.

- The player must fairly strike at the ball with the head of the club such that there is only momentary contact between the club and the ball and must not push, scrape or scoop the ball.

- If the player’s club accidentally hits the ball more than once, there has been only one stroke and there is no penalty.