Another video from the Golf Rules Questions page caused a stir in the comments, with some golf fans calling for a particular rule to be changed. 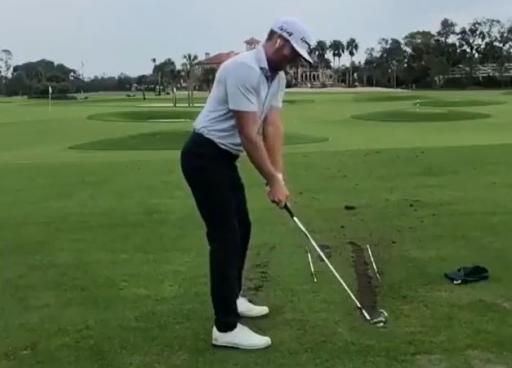 Golf fans believe a particular rule should be changed after seeing a video on a popular golf rules social media page.

The Golf Rules Questions Instagram page is used to show golfers unique incidents and tell them which ruling would come into play should it happen on the golf course.

A lot of the incidents used on the page are pretty rare, but it helps give insight as to what the outcome would be if it happened on one of the professional tours or to an amateur golfer.

In the most recent post, a clip was shown of a player on the driving range, who loses his clubhead during his downswing.

Due to momentum, he continues the swing but of course misses the ball as there is no clubhead attached to the shaft.

The Golf Rules Questions page asked whether this would count as a stroke if it happened during a round on a golf course and the answer came to the surprise of some.

"Yes. If a player continues his swing after the clubhead separates from the shaft on the downswing, it still counts as a stroke. Definitions 'stroke'," revealed the answer.

Of course if you were playing with a few friends and this happened, you'd assume everyone would have a laugh and the player involved would take another crack without the first effort counting, but if it was a competition or tournament, that would not be the case.

"That’s not even fair. He was already part way into his downswing when the club head separated from the shaft. Nobody could possibly stop their swing when already in their downswing," said one golf fan.

"They really gotta change these rules," said another.

"Do you agree, this is the dumbest rule in all of golf. Yes or yes?" read another comment.

"Yeah, I’m not counting that and neither will my players. The USGA and R and A did a great job getting rid of some ridiculous rules in 2019, I’m certain they make this one right in the near future as well."