Harrington and Garcia's relationship 'the best it has ever been' 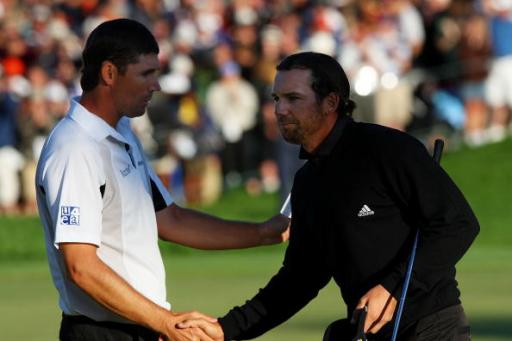 Padraig Harrington believes he has patched up his relationship with Masters champion Sergio Garcia after the Irishman described him as a “ very sore loser” and said the pair greeted each other “with gritted teeth”.

Harrington, a three-time major winner, says he has spoken to the Spaniard after making the comments, adding their friendship is the “best it’s ever been”.

The pair had a fallout following tight tussles in the 2007 Open and 2008 US PGA - both won by Harrington.

"Sergio and I are on a much better footing," said Harrington. "We've had a chat, because obviously clearly there was a bit of an elephant in the room about what I said.

"We have decided that we will look, going forward, at our similarities and the good in each of us rather than any other way. So we are in a great place. So if anything, it's worked out for the better."

After being asked whether the pair had the chat at Rory McIlroy’s wedding at the weekend, he laughed and replied “it was somewhere” .

"As you would expect with these things, literally the first person I met was Sergio,” he added.

"I've got to say, Sergio made it very easy. He was exceptionally good about it. He already was well informed, which was nice. That he looked into the deal of it and he understood what I was actually saying.”