Harry Redknapp: I want to hit golf balls with Gary Neville's face on! 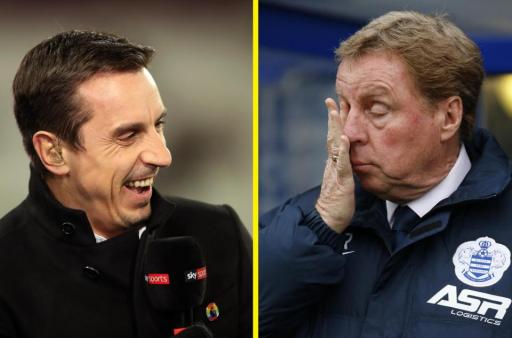 Former Spurs manager Harry Redknapp has hit back at Manchester United legend Gary Neville's latest jibe by claiming he is ready to put the Sky Sports pundit's face on his golf balls.

Redknapp - an apparent 18-handicap golfer - and Neville have been embroiled in a fierce war of words this week after the former England right back claimed Tottenham were "spineless, soft and flaky" when he faced them as a Manchester United right-back.

Neville has also compared his own brief record as Valencia manager to that of Redknapp when he was in charge of QPR and Birmingham.

“So now he’s got to dig up that his win percentage was one per cent better than mine at QPR. I took over a QPR team that had already played 14 games in the Premier league and they had two wins, so it wasn’t exactly taking over a world class team, you know?

“Then at Birmingham I took over a team that had gone 25 games and only won one, that wasn’t easy.

“We all know Gary, he is an excellent pundit and was a great right-back, but he’s opinionated and sometimes he goes over the top.

"He’s not man enough to say: ‘Yeah I was wrong, I’ll hold my hand up, that team Harry had was a good team."

Redknapp finished the interview, saying: "See you, lads. Now I’m going to hit some golf balls and I might put Gary’s head on one of them!”