"Howzat!": Cricket legend Kevin Pietersen shoots his first ever UNDER PAR round

Justin Rose sent his support to the former England cricket captain who has reached a pretty cool milestone. 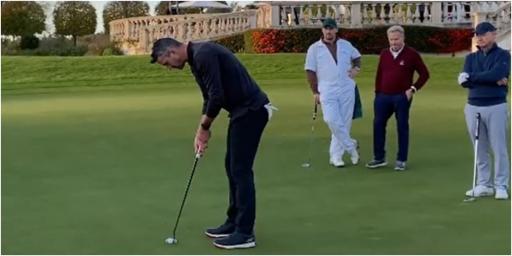 He's a regular at the famous pre-tournament competition at Wentworth Club for the BMW PGA Championship.

Pietersen, 45, plays off a low handicap and can bomb the ball as well.

It's hardly surprising considering his size and how he used to smash cricket balls out of stadiums around the world.

And now he has recorded his first ever round of going under par.

He captured the moment on film and then posted his last putt on Instagram.

This was his scorecard:

As did Rafael Cabrera-Bello and Justin Rose and who said: "Huuuge!"

Ross Fisher joked to Pietersen that he played on an easy course and urged him to do it on a "tough track".

During his career Pietersen scored more than 16,000 runs.

His highest test score of 227 came against Australia.

NEXT PAGE: TIGER WOODS "WANTS TO GET BACK WITH ELIN"