According to the National Enquirer, Tiger Woods' ex-wife is said to have been considering the proposal but wants a $350 million anti-cheating clause added to the contract. 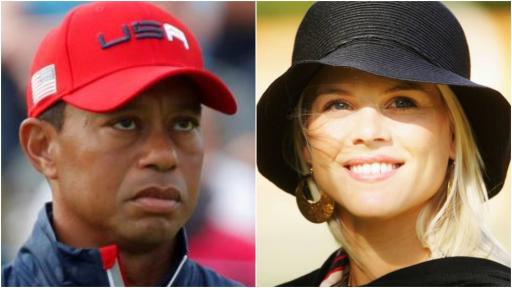 Tiger Woods is said to want to remarry his ex-wife Elin Nordegren, according to a report in the National Enquirer.

Woods, a 15-time major champion, continues to recover from leg injuries sustained in a horror car crash in Los Angeles back in February.

Fox Sports Australia recently published a piece on the revelation in the National Enquirer magazine, which read "Woods wants to remarry Nordegren and he's offering a huge chunk of change to get her back."

The tabloid newspaper also makes the bold claim that Woods, 45, even proposed to Nordegren, 41, last Christmas.

Nordegren, according to the report, has considered the proposal but wants a $350 million anti-cheating clause added to the contract.

Woods' proposed deal is said to be worth over half of his estimated $600 million fortune.

"Tiger didn't even balk at the demand. Even though his accountants think he's crazy, he's ready to sign the pre-nup and set a wedding date," a source told the National Enquirer.

"The guy has never recovered from being dumped by Elin. He's dated lots of models and bimbos, but none of them were more than a one night stand."

RELATED: WHO IS TIGER WOODS' PARTNER AND ARE THEY ACTUALLY STILL TOGETHER?

Nordegren had worked as a nanny for the Swedish golfer while he was on the road on the European Tour and PGA Tour.

Woods and Nordegren then got engaged in November 2003, and they married in October 2004.

Nordegren then learned of Woods' cheating with multiple women on Thanksgiving in November 2009, and there had been rumours that she attacked Woods, who crashed his car into a tree.

They then divorced in 2010 and Nordegren has since dated a number of men including billionaire Jamie Dingman and NHL player Douglas Murray.

Nordegren is currently with former NFL player Jordan Cameron, and they had a baby together last year.

RELATED: TIGER WOODS: BEING A DAD HAS HELPED HIM STAY FOCUSED ON HIS RECOVERY

A source told Us Weekly that Elin and Jordan were "very happy about the pregnancy," adding, "Elin maintains a low profile and has a normal, boring life."

In June 2019, Woods claimed he was on much better terms with his ex-wife Nordegren, whom they share kids Charlie, 12, and Sam, 13, together.

"We communicate so much better now, it’s incredible," said Woods.

"I wish we would have done that earlier on, but it’s been incredible to have a best friend like that."

RUMOUR: TIGER WOODS SPOTTED WITH "HOT BLONDE" BY THE POOL DURING HIS RECOVERY

Woods' current girlfriend is Erica Herman, who he met in September 2017.

Herman had been managing Woods' Florida restaurant, which is called "The Woods Jupiter".

The couple made their first public appearance together in 2017 at the Presidents Cup and she was wearing a "player spouse" badge.

He dated Olympic champion Lindsey Vonn, now 37, in his first "public" relationship since the split.

Dozens of other women have claimed to have had relationships with Woods.

Herman and Woods have been seen in public together a number of times since although the big cat has never posted any images of them together on his social media channels.

They were spotted together enjoying the tennis at the U.S. Open cheering on Serena Williams at Flushing Meadows.

Herman's age is not known but she is reportedly a decade younger than Woods.

Tiger was recently spotted back on the golf course with son Charlie as he continues to recover from the injuries sustained in his horror car crash in Los Angeles in February this year.

Pleasingly for Tiger fans, he is back on his feet and standing without crutches, so let's hope a PGA Tour return is on the cards soon.

NEXT PAGE: THE VERY BEST TIGER WOODS QUOTES OF ALL TIME