Bryson DeChambeau first took notice of Proteus Motion on a social media advert and now he has one of the limited edition machines in his home gym. 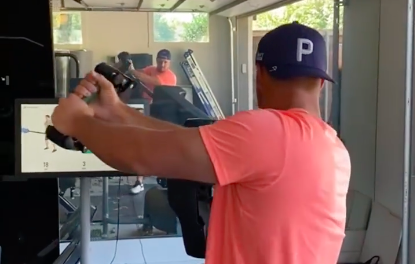 Bryson DeChambeau's pursuit for improvement is absolutely relentless and his work to build muscle and flexibility will inevitably lead to more success.

In early October, the Proteus Motion CEO Sam Miller revealed that as the company is in its early stages of producing revolutionary exercise machines, they only have 50 products available.

3D Resistance is known as the ability to create an equal amount of resistance in every direction with any multi-planar movement. It recreates the position of moving through water.

The machines provide a unique resistance force and in this way, Proteus can measure strength throughout an entire movement.

"You wouldn’t believe how many times I get stuff in the mail claiming to be the next greatest, latest thing. I’m looking for things that have an immediate impact on my performance," DeChambeau said when he first came across the Proteus Motion advert.

The World No. 6 has joined the NBA’s Damian Lillard and MLB’s Noah Syndergaard in the exclusive club of professional athletes who have tried the machines.

The first step of DeChambeau's interest was to try a Proteus Motion machine at a gym in Dallas. But now, he has adopted one in his own home gym.

The former US Open champion intends to help the growing company further the development of its technology.

"I think they’re only working within maybe 10% of what their full capacity is. There’s some pretty interesting programming capabilities that you can do to help potentially train in ways that have never been thought of before," DeChambeau said.

As you can see in the footage above, the machine is suitable for beasts like Bryson. The motion that the machine encourages mirrors that of a golf swing.

NEXT PAGE: GOLF RULES: WHAT HAPPENS WHEN YOU TOP YOUR DRIVE INTO A TREE, THEN DEFLECT IT?