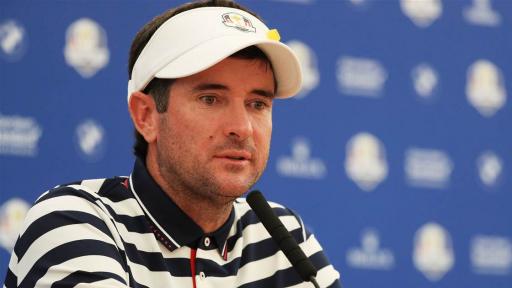 United States Ryder Cup captain Jim Furyk has been dealt a headache on the eve of this week's biennial clash with Europe as one of his 12 players in Bubba Watson has gone down with an illness.

Watson earned his way into a fourth US Ryder Cup side as one of the eight automatics for Le Golf National, and he was also a vice-captain during the United States' crushing 17-11 victory at Hazeltine two years ago.

But the two-time Masters champion has yet to taste victory as a player in the Ryder Cup and has a pretty poor 3-8-0 (W-L-H) record.

RELATED: THE STATS THAT PROVE WHY USA WILL WIN THE 2018 RYDER CUP

Despite that, however, Watson has won three times this season, including victory in the WGC-Dell Technologies Match Play in March, where he destroyed compatriot Kevin Kisner in the final 7&6.

And yes, Bubba did wear a glove in his media press conference, as you do...

“I learned that the team is a lot better without me as a player,” said Watson, who sounded awful as he addressed the media this week, explaining he was fighting an illness that he caught last week at East Lake during the Tour Championship.

Watson says being a vice-captain has very much helped give him greater perspective as a player.

“If you’re like me, with a few meds in you right now trying to get healthy, it doesn’t help the captain. If I say I don’t have any energy, now that guy that I’ve been practicing with is now like, ‘Well, who am I going to get paired with?’ So you’re hurting the captain or the team that way.

Watson, 39, is a combined 2-2 while playing in Ryder Cup matches with Webb Simpson. Simpson is the only member of this US team that Watson has played with in the past.

NEXT PAGE: TIGER WOODS GETS 'COLD SHOULDER' FROM US RYDER CUP SIDE