Ian Poulter may just have a new rival, and he's a Sunshine Tour rookie...

Ian Poulter may have a new rival as this Sunshine Tour rookie produced an epic celebration after draining a big putt to make his ninth cut. 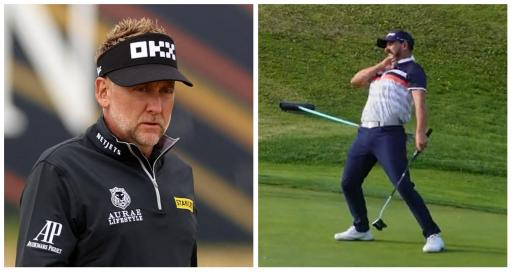 Ian Poulter, who has become a polarising figure in the world of professional golf because of his association with the LIV Golf Invitational Series, just might have a new rival.

For years Poulter, now 46, has been bashing his chest as he collects points for Team Europe in the Ryder Cup.

We're not sure if it has ever been mentioned, but he was given the nickname "The Postman" because he always delivered.

How times have changed and what future he will have in the Ryder Cup and the DP World Tour remains to be seen.

A court hearing in February will determine if Keith Pelley, the chief executive of the DP World Tour, has the power to ban Poulter and the other LIV Golf Tour "rebels".

Kok was playing the Vodacom Origins of Golf St Francis Links tournament this week and needed to sink this putt on the 18th hole to make his ninth cut of his rookie season.

@Kokstar88 putts on the 18th hole to make the 9th cut of his rookie season.

I mean, it's absolutely hilarious and you've got to love it. How do you rate it?

Eddie Pepperell wrote to his fellow Englishman: "You have competition @IanJamesPoulter."

That was for a second round of 70 for Kok. He shot 75 in the final round. The tournament was won by Ruan Korb who came from as many as seven strokes behind at the start of the day to claim the victory, shooting a final day 63.

But it's fair to say that the week belonged to one man...

Next page: 9 players who changed their mind about LIV Golf