LIV Golf player Ian Poulter also said that despite players going their separate ways, this has not affected his friendships with others on the PGA Tour. 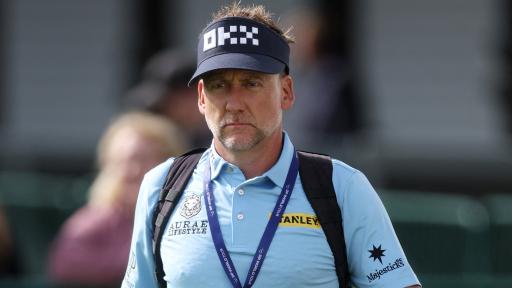 LIV Golf player and European stalwart Ian Poulter has shut down the significance of his heated discussion with Billy Horschel on the putting green at Wentworth.

Poulter and Horschel were filmed in the practice area at the BMW PGA Championship on Wednesday, appearing to have an animated chat over an unknown topic. You can probably take an accurate guess at what they were talking about.

The Englishman received a mixture of boos and cheers when he teed off in the opening round of the DP World Tour's flagship event on Thursday alongside Aaron Rai and Jason Scrivener.

The 46-year-old is one of 18 players from the LIV Golf Series teeing it up in Surrey this week and despite Horschel speaking out against the defectors on Tuesday, Poulter maintains he hasn't lost any friendships in the LIV saga.

"I have no problem with Billy. All these (players) out here, I have been friendly with for a really long time. So let’s draw a line between personal and business.

"It’s really easy to have a level-headed conversation with someone when you respect them, even though you have a difference of opinion. That’s fine. I can still be somebody’s friend.

"That’s the nice thing about this game we play, and it will be a sad time if people let it spill over and take friendships away. That would be sad. We had a lovely chat the night before for an hour, outside the front of the hotel.

"There’s nothing in it. Billy is quite an animated guy, and I am, too. He has strong opinions, and I normally do, too, so you can tell how that would look on camera."

On Wednesday, Rory McIlroy revealed he didn't have "much of a relationship" with the likes of Poulter, Lee Westwood and Sergio Garcia anymore following their switches to the Saudi-backed series.

Poulter has shared many memories with McIlroy at the Ryder Cup such as when he battled back on Saturday afternoon at Medinah in 2012 to kickstart Europe's famous fightback.

After shooting 3-under-par in the first round at Virginia Water yesterday, Poulter wanted to avoid biting at McIlroy's comments.

"I've never, ever used this locker room in all my years I've been here. I don't have to go in there. I've spoken to the guys a lot in the last number of months, none of whom seemed to have a problem with me at my age making the decision that I've made.