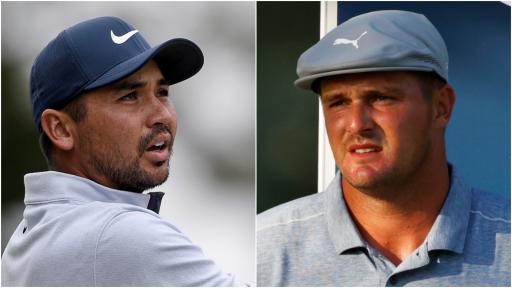 Jason Day might never have transformed his body to the lengths that Bryson DeChambeau has on the PGA Tour in recent months, but the Australian can at least relate to bulking up en route to severe back problems.

Former World No.1 Day has endured a rollercoaster few seasons all down to his niggling back injury, and he is concerned DeChambeau could soon suffer something similar given the stress is putting on his body.

"I had a quick chat to him about his body and his swing," said Day, speaking from last week's BMW Championship.

DeChambeau has certainly done that this year, now weighing in at a beefy 240 pounds, on top of smashing drives well past the 400-yard mark on a regular basis having upped his clubhead speed dramatically to 140 mph and notching a ball speed of more than 200 mph.

Day is just not sure it's all sustainable.

"I may eat my words and Bryson may be out here for 20, 30 more years and still do the exact same thing," said Day.

"But going through what I've done, it can be very difficult to add that weight and try and add that speed very quickly."

Day failed to make the FedEx Cup finale at the Tour Championship after finishing in 57th position on the list, but DeChambeau made it in eighth place and will start the tournament at 4-under par, six strokes behind leader and World No.1 Dustin Johnson.

NEXT PAGE: THE SCORES THAT ALL 30 PLAYERS WILL START ON AT THE TOUR CHAMPIONSHIP