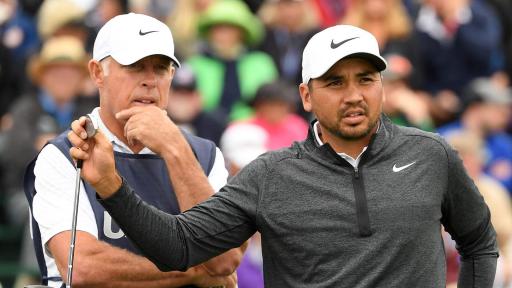 Jason Day has confirmed he has parted ways with caddie Steve Williams after just six tournaments together on the PGA Tour.

Day told the Australian Associated Press that Williams, who is best known for caddying for Tiger Woods during his prime, will no longer be on his bag.

The Australian revealed there had been "disconnect" between the pair following a missed cut at last week's Northern Trust - the first tournament in the three-stage FedEx Cup Playoffs.

"Parting with Steve was a mutual decision and not an easy one to make," Day told AAP.

"He is the ultimate pro; it was a real learning experience being exposed to a caddie who has achieved what Steve has. He has worked with the best.

"But it was a disconnect of old school and new school. Steve has become a friend, and I have a lot of respect for him. I thank Steve for everything he taught me."

Day initially acquired Williams due to feeling a sense of underachievement on the PGA Tour, and he felt working alongside the New Zealander would help take his game to the next level.

"I've got a lot of work to do," Day said several weeks back. "Like we say, we're focusing on trying to win this year, but definitely trying to project and look forward to 2020."

The partnership, however, has resulted in just one top-10 finish at the Travelers Championship. In Day's other five tournaments with Williams, he finished tied 21st, 40th, 66th, and missed the cut twice, most disappointingly at The Open at Royal Portrush.

Day is still in the race for the season-long FedEx Cup as he lies in 50th place heading into this week's BMW Championship.

But he will need a big result this week in order to progress to the 30-man Tour Championship at East Lake next week.

Day will have friend and fellow pro David Lutterus as his bag in Chicago this week.