Jim Herman picked up his third PGA Tour title at the Wydham Championship and secured a place in the FedExCup play-offs. 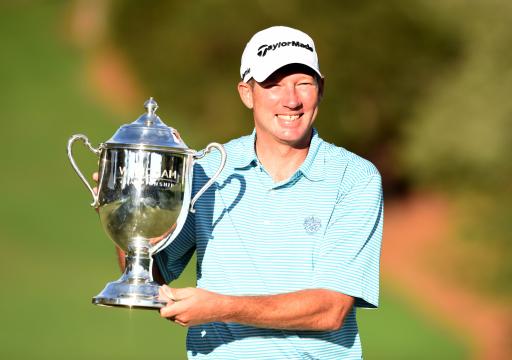 In what turned out to be one of the biggest shocks of the season, Jim Herman clawed his way back from a terrible start to the Wyndham Championship to win the event and land himself in the FedExCup play-offs.

Starting the week in 192nd spot in the FedExCup standings, 42-year-old Herman needed a top-two finish in order to break into the top 125 and play in the first of three play-offs at The Northern Trust.

It looked as though Herman would miss the cut at Sedgefield Country Club in North Carolina in what would have been another disappointing performance from the World No.318, but with three birdies in his last four holes on Friday, Herman made it to the weekend.

Herman came to life on Saturday, shooting a flawless 9-under par round of 61 to get within four of Si Woo Kim, before he followed up with a 7-under 63 on Sunday to beat Billy Horschel by one.

Throughout the tournament, Herman was a machine on the greens, sinking long putt after long putt, including a 30-footer for birdie at the first and a 60-foot monster for eagle at the par-5 5th.

Herman's only bogey of the day came at the par-4 6th, but he cancelled it out when he rolled in a 15-foot putt for birdie at the 8th and added three more birdies to his scorecard on the back nine.

Horschel, who was playing in the group behind Herman with Doc Redman, made birdies at 13 and 15, but a costly mistake at the 16th allowed Herman to take the lead with his birdie at 17.

Former FedEdCup winner Horschel had two chances to make birdie at 17 and 18 to share the lead, but the American couldn't find the hole after a solid week with the putter.

Herman was clearly a little nervous as he watched Horschel finish his round, as he nearly swallowed his bottle cap whilst trying to drink some water.

Everything was easy for Jim Herman today.

Overnight leader Kim couldn't save par at the 17th, dropping him from solo third to T3 alongside Kevin Kisner, Webb Simpson and Redman after the South Korean only managed a level-par final round on Sunday.

NEXT PAGE: Tiger Woods confirms he will play in The Northern Trust