John Daly to play in Barbasol Championship after Open withdrawal

John Daly will play in the Barbasol Championship, just days after withdrawing from the 2019 Open Championship through injury. 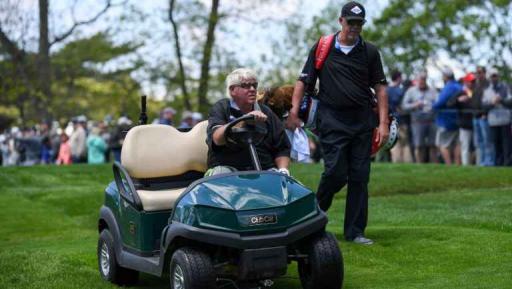 John Daly was left very disappointed with the R&A last week when they denied his request to use a buggy for the 148th Open Championship at Royal Portrush. Just days later, Daly withdrew from the tournament due to a medical condition, according to R&A officials.

Daly then took to Twitter to reveal that he had been bitten by a spider and had to have surgery as the bite had caused a major infection to his abdominal area.

In the same post he revealed that he had to have mouth to mouth compressions, which makes you think his condition was pretty serious at the time and no one questioned his decision to drop out of the Open. Read Daly's tweet here.

It's now been confirmed that the two-time major champion will be playing in the Barbasol Championship at Keene Trace Golf Club after accepting a sponsor's exemption into the event.

Barbasol Championship tournament director Bryan Pettigrew confirmed that Daly will be allowed to use a golf cart for next week's event and tournament officials have been in contact with Daly for several weeks about exploring the possibility of Daly's involvement in the tournament.

“We have been trading emails since then and talking about him coming to Kentucky, and he had interest,” said Pettigrew. “When we read about The Open and his considering to play across the pond, we decided we’d better get our official invite to him.”

It seems all too suspicious that Daly has made a miraculous recovery from his so called injury and can now play in another event, an event in which he has been told he can use a golf cart...