John Daly has vowed to change his lifestyle by cutting down on Diet Coke and quitting smoking as he battles with bladder cancer. 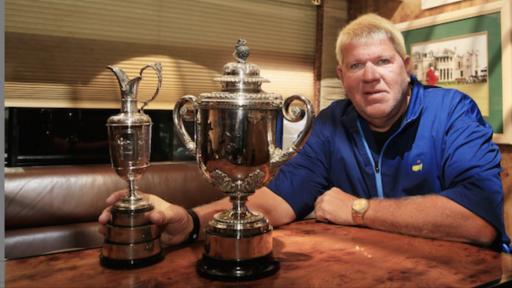 Former Open Champion and fan-favourite John Daly says that he is "not scared to die" and has vowed to try and live a healthier lifestyle, as the famous big-hitter revealed he has bladder cancer.

After undergoing a recent surgery to remove the cancer, Daly said that he is praying for a miracle, but fights an 85% chance of the cancer returning, according to his doctors.

Daly admits he drinks excessive amounts of Diet Coke and "counts the minutes" before another cigarette, but the two-time major winner wants to do everything he can to keep the cancer away, starting by living a healthier lifestyle.

Hey All, thank you all so much for all the love, texts, msgs & support thru this! It’s all still shocking for me but know I’ll do what I have in me to beat this! My whole life I’ve beaten the odds, so it’s NOT time to stop now! Ready for 2020 to be fkn over! #gripitandripityall

"My urologist said there's an 85 per cent chance it comes back," said Daly.

"So I've got to go back and see him in three months. They will probably have to cut it out again. It's probably going to come back, and then another three months that you don't know.

"You just don't know. Luckily for me they caught it early, but bladder cancer is something. I don't know all the details, but it doesn't look like it may go away.

"We will just see what happens. Maybe there is a miracle.

"I'm cutting way, way back on the Diet Coke and counting minutes before I can have a cigarette. I'm trying to quit smoking. The doctors aren't saying it's too late. Unfortunately, it's a cancer that keeps coming back.

"Six months to a year, if it doesn't go away, I'm going to live my life. I'm going to have some fun. No matter what happens, I'm not scared to die.

"It would have been nice to play the last seven or eight or 13 years of my career a little more healthy. But hey, I'm still working, I'm still living life. I'm still doing the things I need to do.

"I can accept the challenge. I'm not scared of that. I just want my kids to be OK and everyone else in my family."

NEXT PAGE: Golfer RIPPED for standing at his ball for over a minute