Woods and Rose open up two-stroke lead on rivals heading into weekend at Tour Championship. 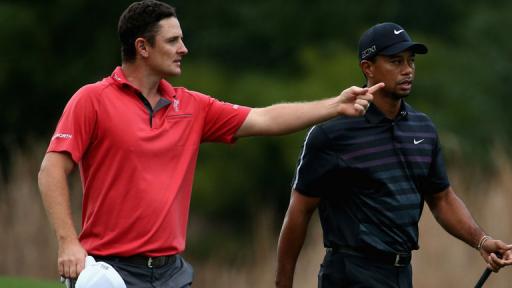 Justin Rose might be paired with Tiger Woods for today's third round of the Tour Championship, but he admits there is much more on his mind than that with a lucrative pot of gold in his sights at East Lake.

Rose, who moved to World No.1 for the first time in career two weeks ago, finished runner-up to Bryson DeChambeau at the Dell Technologies Championship several weeks ago before losing to Keegan Bradley in a playoff at the BMW Championship.

A similar scenario could play out this week for Rose, locked in battle with Woods on 7-under par heading into the weekend at East Lake, and a number of other big names tucked in behind like Rory McIlroy who sits just two back.

But Rose is ready to get the job done this week, and scoop the $10 million FedEx Cup jackpot at the same time. A win secures it all.

“I'm in a position where I want to win this golf tournament and I can keep it as simple as that,” said Rose, who is projected to win the FedEx Cup as things stand. “I know that if I do that, it's gravy all the way.”

Saturday marks the fourth time that Rose and Woods have played side-by-side this year, doing so in the first two rounds of the Memorial and in the third round at Bay Hill. Rose bettered Woods on all three occasions.

“Yeah, that is cool,” Rose said of being paired again with Woods, but added, “there's more on my mind than just playing with Tiger tomorrow, for sure.”

Woods opened up a two-stroke lead after the 15th on Friday but double-bogeyed the 16th after finding trouble in the fairway bunker, but birdied the final hole to tie things up with Rose heading into the weekend.

“Best way to describe it is I ground out a round today,” Woods said. “I wasn't quite as sharp as I was yesterday, but hung in there and tried to miss the ball on the correct sides so I had angles. For the most part I did that.”

It marks the first time that Woods has held a share of the lead after 36 holes on the PGA Tour this season.