Justin Thomas has defended his actions after he caused debate on social media following his gimme incident at the Presidents Cup. 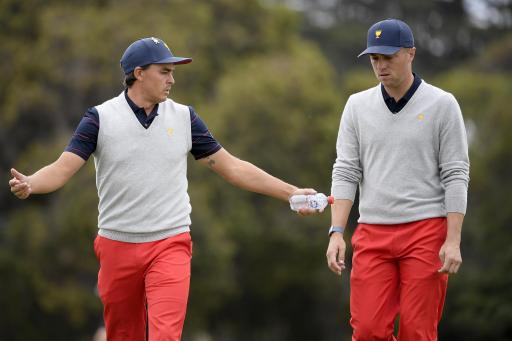 Justin Thomas has defended himself online after he received an onslaught of negative comments over his controversial gimme incident during the Presidents Cup.

The incident occurred during Saturday's fourballs when Thomas and his good friend Rickie Fowler took on Marc Leishman and Haotong Li from the Internationals.

On the 11th green, Thomas' ball was three feet from the hole and after a brief exchange with Leishman, Thomas marked his ball so Fowler could chip onto the green, but it was clear that JT felt he should have been given the putt.

Once Fowler had made par, Thomas rolled his putt in for birdie and as soon as the ball dropped into the cup, the American measured the distance with his putter.

Thomas and Fowler won the hole and went on to beat Leishman and Li 3&2, a crucial point that eventually helped the USA win the Presidents Cup with 16 points to the Internationals' 14.

Videos of the incident quickly surfaced around Twitter and Thomas received a huge backlash over his actions.

"Just staggering arrogance and bad sportsmanship. Just knock in the 3 footer and move on kid," said one Twitter user, who attached a video of the controversial incident with his tweet.

More and more Twitter users got involved in the debate, with most of them feeling that Thomas was out of line for his actions, eventually leading to JT responding to a comment in an attempt to explain his actions.

"Just having fun with my partner was all I was doing. Totally understand it didn’t come off as a good look I’m sorry for that. But Rick and I like to have fun and I show some emotion to pump us up," said Thomas.

Just having fun with my partner was all I was doing. Totally understand it didn’t come off as a good look I’m sorry for that. But Rick and I like to have fun and I show some emotion to pump us up

Although Thomas apologised for his actions, multiple golf fans were disappointed with JT's lack of sportsmanship.

Yet he made Haotong Li hole one from closer range the previous hole.. very ordinary @JustinThomas34

I agree Mark. They may end up winning the cup but it hasn’t been a great PR week for the Americans.

Wouldn’t give him anything Tbf pic.twitter.com/6xwNPYzYtM

Pretty disappointing. He’s always struck me as the kind of guy who WOULDN’T carry on like that.

Pathetic, anyone could miss that putt. This is a very Unfortunate way of being that is now cultivated on the PGA Tour.

NEXT PAGE: Golf gimmes - are they good for the game?