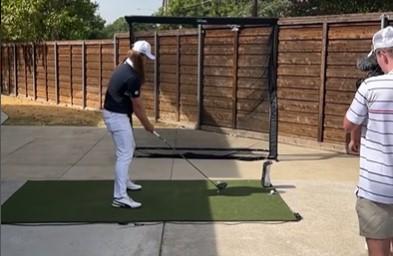 Back in February, Berkshire set a new personal best mark of 234.4 mph in an intense session where he averaged 228.7 mph over 150 balls. He also reached the 160 mph mark with clubhead speed.

In a video that Berkshire posted on Instagram two days ago, supposedly at DeChambeau's house, he took an almighty swipe at his ball and seconds later, the former US Open champion was celebrating.

Berkshire, who beat Tim Burke in the final of the World Long Drive Championship three years ago, broke his own record and said it is one of his "proudest achievements ever."

"This is one of my proudest achievements ever. I’ve been working my tail off for the last 3 years to scratch and claw my way from 230 mph to the next speed benchmark of 235+ mph. To have @brysondechambeau there pushing me made it even better," Berkshire wrote on Instagram.

"I know some people might not understand why this record matters, and plenty will point out that “it only carried 291 yards” (this is due to a misread on spin… at these speeds spin is very hard to pick up when the ball only travels a short distance) but the fact is when you spend your life doing what you’re passionate about, it brings about a special feeling of happiness and satisfaction with life.

"This is how I feel about the sport of long drive (and breaking speed records/pushing limits) and I hope everybody reading this finds their passion in life and takes it as far as they can."

Berkshire is a PUMA athlete like DeChambeau and back in October 2021, the pair competed against each other at the inaugural PLDA World Championships in Nevada.

On his Long Drive debut, DeChambeau advanced to the final day but it was Berkshire who beat Justin James to the main prize of $50,000.