How will Bryson DeChambeau get on at the World Long Drive Championship? 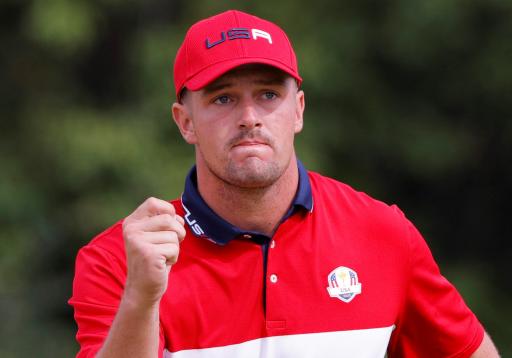 Fresh off helping Team USA win back the Ryder Cup in devastating fashion, Bryson DeChambeau will compete in the Professional Long Drivers Association's World Championship on Tuesday at Mesquite in Nevada.

DeChambeau, who is the PGA Tour's longest hitter with an average drive of more than 320 yards, took two and half points from a possible three at the Ryder Cup over the weekend as USA ran out a record-breaking 19-9 victory over Europe.

The big-hitting American unleashed a number of bombs at Whistling Straits, none more so than his 417-yard rocket on the par-5 5th on Friday, which left him 72 yards to the pin.

Tiger Woods PARTIES with Rory McIlroy's ex-girlfriend at foundation fundraiser
At Tiger Woods' event, this Rory McIlroy putt will give you HEART palpitations

He went on to make eagle and win the hole in the process.

DeChambeau also drove the 1st green in his Sunday Singles match against Sergio Garcia, before going on to drain the eagle putt from 35 feet.

He would go on to defeat the Spaniard convincingly 3&2.

IN-BLOODY-SANE… ⁦@b_dechambeau⁩ just smashed a drive 417 yards.
This is one of the greatest shots in Ryder Cup history - if not THE greatest. Wow.
pic.twitter.com/K4i8htYp3l

Golfers from the PGA Tour do not typically enter the World Long Drive competition because their distance is usually way off the pace compared to Professional Long Drivers such as Kyle Berkshire.

While DeChambeau is an outside 20/1 shot to win the event, we admire him for doing his best to widen the profile of our great sport.

He made it clear prior to the Ryder Cup that he is wanting to take part to help grow the game of golf.

DeChambeau's longest drive out on the course stands at a whopping 480 yards, albeit downhill and downwind. That happened during his appearance on 'The Match' en route to victory alongside Aaron Rodgers against Phil Mickelson and Tom Brady - WATCH HERE

His average drive on the PGA Tour last season stood at 321.5 yards, which was narrowly ahead of Rory McIlroy.

Bryson DeChambeau DROVE THE GREEN at the #RyderCup

DeChambeau tees up in the Open Division on Tuesday.

There are five groups, each of which include 16 contestants. Bryson finds himself in Group 3.

The Top 12 from each group on Tuesday then advance to the Final 64, while the 13th place in each group play in a wildcard match.

The final will then take place on Friday.

As well as the Open Division, there are also Seniors and Ladies events.

The World Long Drive event dates back to 1974 when Jim Dent won the first two tournaments, before Evan 'Big Cat' Williams then went back-to-back. In those days, the winning drive was around the 320-yard mark.

Nowadays, it's some 100 yards further - fuelled by new fitness routines and of course modern-day driver technology.

Long Drive contestants are required to hit drives down a specified grid area, so there is an element of accuracy about it as well as just outright distance.

But DeChambeau is pretty accurate, or at least he was at Whistling Straits last week, so the grid (approx 50 yards wide) should prove no obstacle for him.

Bryson has been warming up nicely for the event with some outrageous drives at the Ryder Cup, and he has also been spending plenty of time with Long Drive pros such as Kyle Berkshire, who is the reigning long drive champion following a drive of 474 yards.

HOW TO WATCH BRYSON IN ACTION

WHEN DOES IT TAKE PLACE?

NEXT PAGE: HAS BRYSON FINALLY CHANGED PERCEPTIONS AFTER THE RYDER CUP?