If ever we needed more proof that the Rules of Golf were in an urgent need of an overhaul, it was offered up by the bucket load at yesterday’s ANA Inspiration, writes Women & Golf's Becky Gee.

The 18th green, which should have been a stage where Lexi Thompson could rejoice in one of the greatest displays of ball striking ever seen at a ladies major championship in recent years, instead provided the backdrop for golf’s latest embarrassing rules farce.

As Thompson walked over Poppie’s Pond in tears yesterday, the fundamental flaws in the game’s rulebook had never been so plainly visible.

The American had been handed a four-stroke penalty on the 13th tee after a TV viewer had spotted the 22-year-old had incorrectly marked her ball during Saturday’s play.

The incident comes less than a year after Anna Nordqvist was robbed of her chance to win the US Women's Open after video footage showed she had grazed a few grains of sand in a bunker during a playoff with Brittany Lang.

It was hard to know what was more gut-wrenching about the penalty. The sheer unnecessity of the viewer’s decision to email and point out a tiny discretion that had happened a day previous, or the fact that the infringement, in which Thompson was seen placing her ball less than an inch to the right of the place where it had originally lay, would never have had any impact on the outcome of the tournament.

Indeed, when she replaced the ball to play the two-foot putt, it was, if anything, further away from the hole.

“This is wrong,” said Kerr, the 18-time LPGA winner told the Golf Channel.

“Where’s the common sense? Where’s the discretion? Where's the honour? This kind of stuff has to end. It makes us look bad. It makes the game of golf look bad.”

The ill-timed penalty not only ruined an incredible performance by the young American star, but also went some way to robbing So Yeon Ryu, one of the most popular players on Tour, of the right to celebrate her own victory.

The world number three's leap into the famed Poppie’s Pond will forever be tinged by the fact that this was, and should have, been the right reserved for the best golfer in the field that week, Lexi Thompson. 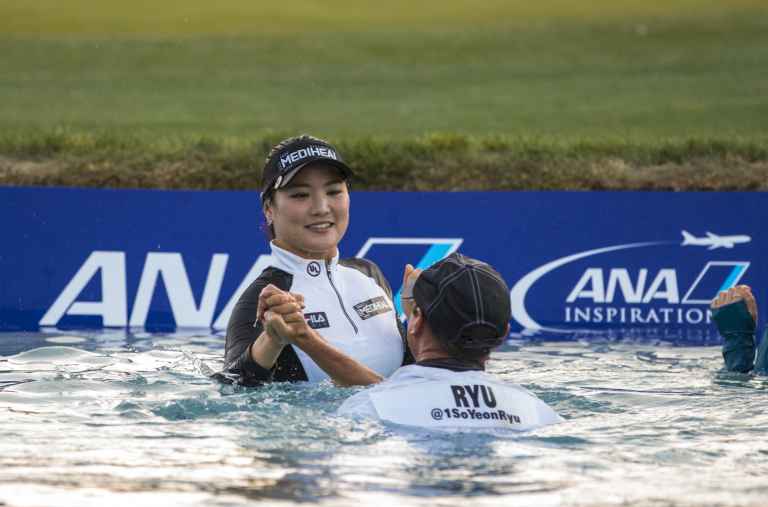 Despite being somewhat of a veteran on Tour, it’s easy to forget that Lexi is still essentially a youngster, and huge credit must be given for the way she handled herself throughout the whole incident.

Where’s the common sense? Where’s the discretion? Where's the honour? This kind of stuff has to end - LPGA Tour pro Cristie Kerr

She could be seen weeping on the 13th tee but bounced straight back with a birdie, followed by two more over the course of the last five holes, and where many of us would have been left bitter by the ordeal, Lexi handled the situation with incredible dignity, even lingering after the round to sign autographs.

When Thompson played a brilliant 5-iron to 18 feet to set up an eagle chance on the final hole, you couldn’t help but feel that the American was about to make one of the most deserved triumphs over adversary in modern golfing history. But it wasn’t to be.

Nonetheless, So Yeon Ryu's playoff victory, while enabling one of the most deserving players on Tour to pick up her second major title, only cemented the fact that golf’s rules changes, which will come into effect in 2019, cannot come soon enough.

What did you make of the Lexi Thompson rules controversy? Share your thoughts in the GolfMagic forum or join us on social media.