Lexi Thompson led by five shots at one stage in the final round at the Olympic Club, but failed to make the playoff which was won by Yuka Saso. 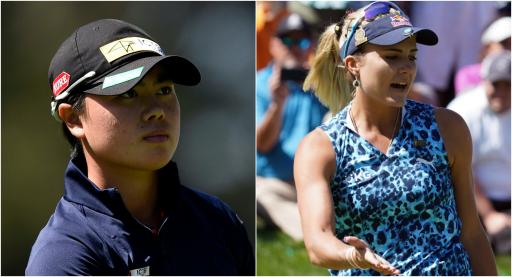 Lexi Thompson experienced a stunning collapse during the final nine holes of the US Women's Open at the Olympic Club, which was won by Yuka Saso in a playoff against Nasa Hataoka.

Thompson, who was looking for the second major title of her career, began the day well with two birdies in her opening five holes to extend her lead.

The 26-year-old led by a staggering five shots after eight holes and it looked as though the day was becoming a formality for the World No. 9.

The eventual champion, Saso from the Philippines, made two double-bogeys in her first three holes to fall well behind the leaders, while Hataoka also made a double-bogey on the par-4 6th hole.

Thompson led by three with seven holes remaining but a double bogey on the 11th hole and bogeys on the 14th and 17th holes allowed her opponents a way back into the contest.

With one hole remaining, Thompson, Saso and Hataoka shared the lead on 4-under-par, but the American agonisingly missed a par putt on the 18th hole at the Olympic Club to fall short of the playoff.

Saso and Hataoka both played the two-hole aggregate playoff in level-par, but when the playoff turned to a sudden death format, Saso claimed victory on the third hole with a fine birdie.

The 19-year-old became the first-ever major championship winner from the Philippines in the history of the sport and matched Inbee Park's record as the youngest ever winner of the US Women's Open.