A host of Premier League footballers jetted out to Dubai to play some golf during their break from action and they met up with some of the professionals. 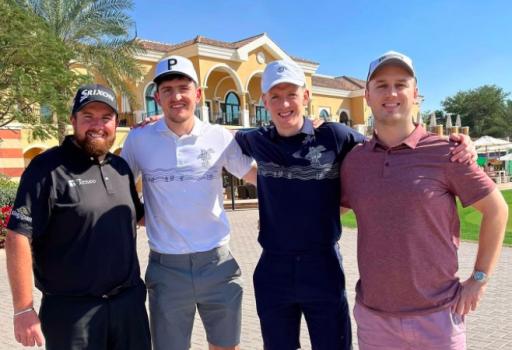 It is a well-known fact that many professional footballers enjoy golf in their spare time and there are many current Premier League stars who can't wait to get out on the course.

England's top division is currently on a break, so some of the country's best players have jetted out to Dubai to play some golf ahead of the Slync.io Dubai Desert Classic.

Liverpool are currently hunting down Manchester City in the title race, so Andy Robertson, Alex Oxlade-Chamberlain and James Milner spent some well-earned free time at the Emirates Golf Course.

The trio played alongside 2011 Masters champion Charl Schwartzel, while Robertson got to spend some time with fellow Scotsman Robert MacIntyre.

RELATED: BRYSON DECHAMBEAU OR RORY MCILROY - WHO HAS THE BEST DRIVER SWING?

"Sometimes a break is good, sometimes not so good, and in the back of my mind I know I am going back to a hell of a fight with Liverpool and Scotland," Robertson said.

"But it’s important to try to switch off, do the things you love and enjoy the nice weather.

"There’s been no coordination between us all about coming out here. It’s just a popular spot and a popular sport among players. Football is so intense you need to try to recharge the batteries and come out firing and golf is a great way to relax."

This group of four competed in the first of two pro-ams before the tournament begins tomorrow. The left-back intends to watch the first day's play then head home on Friday.

The pair teed it up with 2019 Open champion Shane Lowry at the Els Club. They are due to play in the second pro-am of the week which begins today.

Manchester footballers Jack Grealish and Jesse Lingard also enjoyed a round in the sun. It is fair to say that Dubai is an extremely popular place for both professional and amateur golfers.

NEXT PAGE: COLLIN MORIKAWA HAD "NO CLUE" WHERE THE BALL WAS GOING IN ABU DHABI