Love III on US Ryder Cup loss: "I dropped the ball on 2 or 3 things" 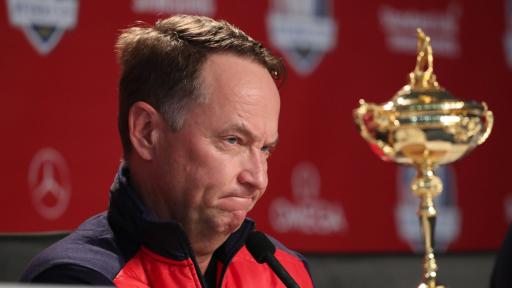 Davis Love III may have only been one of Jim Furyk's assistant captains in the 2018 United States Ryder Cup team, but he has revealed how he "dropped the ball" on a number of incidents in the teamroom, especially where Patrick Reed was concerned.

The USA's humiliating 17.5-10.5 defeat at the hands of Europe at Le Golf National may have happened four weeks ago, but the leadership among the stars and stripes are still figuring out exactly where things went so badly wrong.

None more so than Love III, a veteran of eight Ryder Cups including his captaincy in 2012 and 2016, who has held his hands up for what happened in France.

“I dropped the ball on two or three things that could have helped, and I apologised to Jim [Furyk],” Love told Golf Digest last week.

“I should have seen some of those things coming.”

One of the major areas Love refers to is not letting Masters champion Reed know that he wouldn’t be playing with Jordan Spieth well in advance of the Ryder Cup - a player whom Reed had compiled a 4-1-2 (W-L-H) record with in two previous Ryder Cups.

This had been one of Love's resposnsbilities set by Furyk, according to reports. Instead, Love informed Reed during the week of the Ryder Cup that he would be paired with Tiger Woods.

RELATED: REED LASHES OUT AT SPIETH

Following the USA's defeat, Reed told the media he felt blindsided and called the decision-making process a “buddy system” that ignored the input of all but a few players. Since that story, Furyk and others have spoken to Reed to try and clear the air, among other conversations that have taken place.

Then there was Dustin Johnson and Brooks Koepka's bust-up on the Sunday evening of the Ryder Cup, which Furyk has since confirmed despite Koepka telling the media the story had been made up. According to reports, the nature of their argument centered around a third party.

Steve Stricker, another one of Furyk's vice-captains, said: “We all talked to one another in the week after and tried to decipher what came out compared to what actually happened. It’s sad we lost and unfortunate [that some things happened].”