LPGA star has a NIGHTMARE in the water, but what ruling followed?

An old video from the LPGA Tour was used on the popular Golf Rules Questions Instagram page. 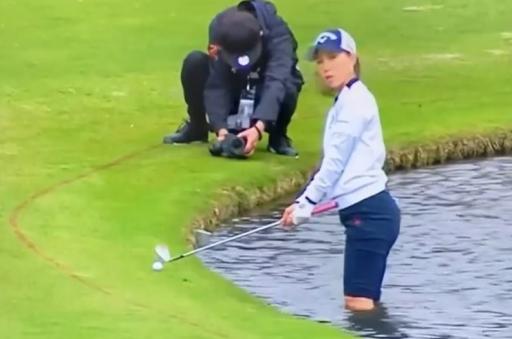 A few months ago, a video started circulating on social media of an LPGA player having a bit of a nightmare after making the effort to play a shot whilst standing in the water and now we know what her options were after the shocking attempt.

Don't get me wrong, I wouldn't have even bothered attempting the shot and it took some guts to give it a go, but it's safe to say it really didn't pay off.

Going to all that effort to attempt such a difficult shot took a lot of courage, but there's no doubt the LPGA Tour star was full of instant regret after sending her ball straight into the water.

A lot of golf fans (myself included) did have a good laugh after seeing this video for the first time and it's now been used on the popular Instagram page Golf Rules Questions, where we now have a better understanding of the multiple options the player had available after the shot.

WATCH THE NIGHTMARE SHOT IN THE WATER BELOW:

This rules scenario in particular had multiple answers as the player in question had a lot of options to choose from.

- The player can play their ball as it lies.

- Rule 17.1d(1) - stroke-and-distance - Go back to their last spot played from inside the penalty area for a one stroke penalty

- Rule 17.1d(3) - (because it is a Red Penalty Area), drop a ball within two club-lengths, outside the penalty area and no nearer the hole, of the estimated point where the ball last crossed the edge of the penalty area, for a one stroke penalty.

- Rule 17.2a(2) - stroke-and-distance - Go back to their last spot played from outside the penalty area for a one stroke penalty.
- if the player drops their ball inside the penalty under Rule 17.1d(1), they can still use one of the other options for another penalty of one stroke.