Meet Sadom Kaewkanjana: The most in-form golfer in the world

Sadom Kaewkanjana has won four times in his last nine appearances on the Asian and Thailand Tours and he is climbing the world rankings. 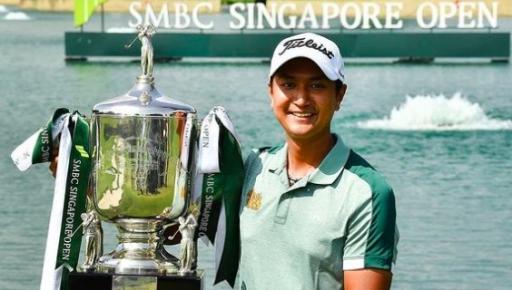 Sadom Kaewkanjana is probably the best golfer you have never heard of. He is taking the sport by storm in Asia and he excelled yet again at the weekend.

Kaewkanjana won the SMBC Singapore Open by three shots and earned his place at The Open Championship in July. Paul Casey finished tied 16th at the event.

"This is amazing, it wasn’t easy. It has taken a lot of hard work to get here, especially over the last two years. This is a great way to start the year. I hope it’s the start of a great year," said Kaewkanjana after his win.

But this result was just another standard performance in the recent hot streak from the Thai golfer. After finishing tied 8th at the Singha all Thailand Championship in 2021, he was ranked 743rd in the world rankings.

Now, he has reached 148th in the rankings, his career-high mark. His win at Sentosa Golf Club took him ahead of the likes of Adam Hadwin, Luke List and C.T Pan.

In this time, he has won the Singha Laguna Phuket Open, the Thailand Open and the Singha Classic. 11 starts ago, he also finished second at the Boonchu Ruangkit Championship.

Kaewkanjana is one of the most talented players in Asia and he is slowly becoming recognised at world level too. His age and fearlessness are clear for all to see.

He holds entries in the Saudi International and the Royal's Cup on the Asian Tour in February. In 2019, he became the record fastest Qualifying School graduate to win on the tour at the Bangabandhu Cup Golf Open.

There are many rising stars on the Asian and Thailand Tours in 2022, so make sure you keep abrest of all of these fantastic players.