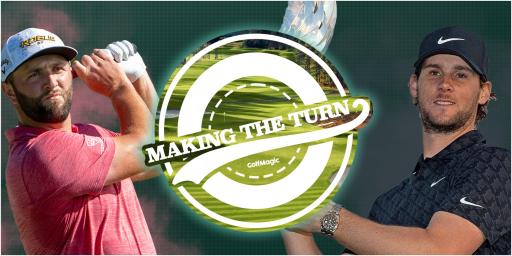 If this is your first time here, this is a weekly update of everything you may have missed from the week in golf.

Of course, it was not without controversy. Tyrrell Hatton snapped his clubs and let the F bombs fly.

On the other side of the pond, Rahm vented similar frustrations over the "putting contest" the PGA Tour had set up at The American Express.

Elsewhere, Danielle Kang picked up another win. She became the champion of champions with a three stroke victory over Brooke Henderson.

Let's dive in to what else you may have missed.

Sensible Pieters gets it done in Abu Dhabi

Thomas Pieters got claimed the biggest victory of his career.

He hoped his victory would inspire a generation of youngsters.

Then he outlined his plans for how to celebrate.

Still, that week will be remembered for some windy conditions.

Even Rory McIlroy saw the funny side of it.

Hudson Swafford became the champion of The American Express for the second time.

Five years after his first victory there, he emotionally revealed how the win was dedicated to his late father.

What an interesting week for Hatton, the 30-year-old Englishman.

At the beginning of the week he raged at not backing off a shot when the wind got up.

Then he snapped his driver and took aim at the course design.

Just don't ask him what he thinks of that bunker in the middle of the 18th fairway.

Still, Hatton has a knack for hitting small fairways.

The world number one was not best pleased with the low scorers.

He perhaps wasn't aware he was being filmed when he marched off the green.

But it sent golf Twitter into overdrive. His behaviour divided opinion.

Birthday boy Fleetwood outlined how he was frustrated by his 2021 season.

That was capped off by a miserable defeat to the United States in the Ryder Cup.

Looking back, these instructors giving the world their thoughts on how Tiger Woods would fare is utterly hilarious.

Thoughts included the cat swinging the club too fast and not being able to handle the pressure of winning a major.

Check out that here.

A 6ft 10ins bomber from South Africa arrived in California to make his debut.

We all admired just how far he could hit the ball. That ball speed is frightening. Yet he didn't make the cut.

Great break to begin with... then it all goes badly wrong!

Danny Lee and Jonas Blixt became victims of this par-3 at The American Express.

Lee eventually got the ball in the hole for a quintuple bogey.

Swede Blixt also hit consecutive shots backwards and had to write down a painful seven on his scorecard.

Lefty bombs one, from a fairway bunker, with a driver

There was also another Lefty impression on the DP World Tour.

There is no doubt this will probably be seen as the best shot come the end of the year.

There were equipment drops from Cobra.

DK got it done in fine fashion.

She won the first LPGA Tour event of the year with a three-stroke victory at the Hilton Grand Vacations Tournament of Champions.