England's Mel Reid races out the blocks at the 76th US Women's Open at Olympic. 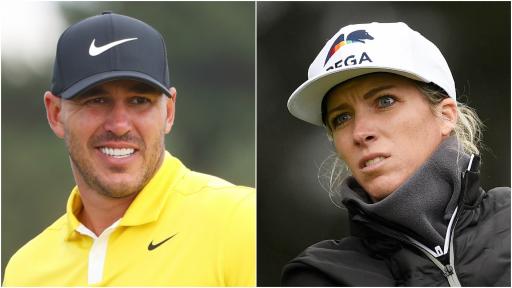 England's Mel Reid told how she facetimed Brooks Koepka for an hour earlier this week before she raced into an early share of the lead alongside 17-year-old amateur Megha Ganne at the US Women's Open on Thursday.

Reid, who opened with a solid 4-under 67 that featured five birdies and a sole bogey at the final hole, praised the "invaluable" advice she received from four-time major champion Koepka heading into the tournament.

"I'm just trying to be a bit more like Brooks, honestly," said Reid in her post-round interview, without disclosing exactly what sort of advice was shared.

Koepka and Reid played a number of rounds together when Reid was based down at Floridian National Golf Club in South Florida.

She has since moved to Jacksonsville, Florida, after her partner Carly Grenfell got a job with the PGA Tour.

Reid, 33, came out publicly about her sexuality in 2018 and then became a pro ambassador for Athlete Ally.

The goal, according to Reid, was to fight for inclusion and to be a voice for those who may be struggling.

"Now I feel very comfortable, and I'm proud to do what I do, but it's a responsbility that I want in a way," said Reid.

"It's a privilege to have that kind of responsibility. If you have a platform and are trying to change things."

Reid, who won her maiden LPGA Tour title last year at the ShopRite LPGA Classic in October, is seeking to win her first major championship this week.

She certainly believes fate could be on her side this week, especially given Wilfried Reid, a protege of Harry Vardon who designed the course, could possibly be related to her.

"I was thinking about it, and his middle name is Arthur, and my dad's name is Arther after his grandad. He's also from Nottingham, which is just down the road. It actually makes a lot of sense."

Reid shares the first-round lead at the US Women's Open on 4-under par with fresh-faced 17-year-old amateur Megha Ganne, who becomes just the sixth amateur in this championship’s history to shoot 67 or lower.

NEXT PAGE: XANDER SCHAUFFELE SWITCHES TO ARM-LOCK PUTTING METHOD, BUT THEN SAYS IT SHOULD BE BANNED