Donald Trump was pictured on his golf course in Virginia without his clubs, leading to speculation he was trying to meet privately with his lawyers. 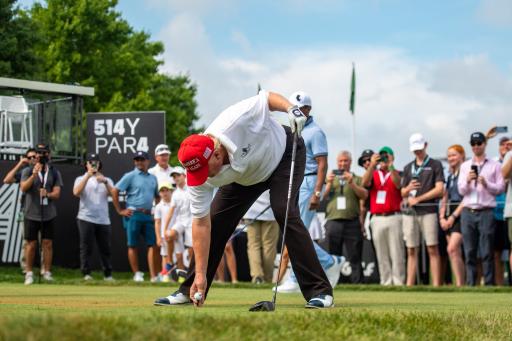 Donald Trump is no stranger to the fairways, but he turned heads on Monday when he was pictured on the golf course WITHOUT his clubs.

Rumour has it 45 was reportedly trying to meet "privately" with his lawyers at his golf course in Sterling, Virginia over his mounting legal problems.

Images from the Associated Press that have been circulating show Trump, 76, meeting with a group of men who are also without golf equipment.

One of the men also there was his 38-year-old son Eric, who rode shotgun with his dad on a golf cart.

The group reportedly drove around the course and were snapped deep in conversation on several greens.

Related: Donald Trump hails Saudis for their commitment to golf

Trump also appeared to be pictured with his former lawyer Ty Cobb, who served in his administration for one year. Cobb later told CBS that he believes the chances of Trump being indicted are now "very high".

However, Cobb told the publication that he believes Trump is more likely to be indicted over his connection to the Capitol riots and not the FBI raid.

Trump's Mar-a-Lago residence was raided on 8 August. They claim they recovered a raft of documents that were classified.

Michael Cohen, his former fixer who sensationally turned against him before he was jailed for lying to Congress, federal tax crimes and financial campaign violations, posted this:

Many are asking me why Mr. Mushroom Putter was at his DC Golf Course (which is really in Virginia)? He says to play golf. My sources say he was meeting with 2 lawyers in secrecy and didn’t trust being at their offices. Notice there are no golf clubs on the cart!!! pic.twitter.com/KOvzgD2mxC

I wonder if Trump realizes there’s a good chance that at least one of these men is an FBI mole? pic.twitter.com/UD78s0zgGO

Conway noted that it "hasn't exactly been golf weather here". Then he made a few puns to twist the knife on Trump.

"It's been arraigning — I mean, raining," he wrote. "I have zero indict — I mean, insight — into what's happening here."