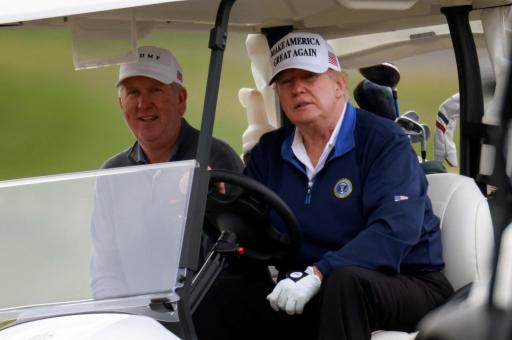 Former United States President Donald Trump has urged the world's best golfers to "take the money now" and break away from the PGA Tour to join the Saudi-funded LIV Golf Invitational Series.

Trump, 76, made his feelings be known a week ahead of the third LIV Golf tournament taking place at his Trump National Golf Bedminster course in New Jersey from July 29 to 31.

"All of those golfers that remain 'loyal' to the very disloyal PGA, in all of its different forms, will pay a big price when the inevitable MERGER with LIV comes, and you get nothing but a big 'thank you' from PGA officials who are making Millions of Dollars a year," Trump wrote on Truth Social Monday.

LIV Golf has already attracted the likes of Dustin Johnson, Bryson DeChambeau, Phil Mickelson and Patrick Reed, and it would seem they are not finished yet in their pursuit to add more PGA Tour names to their roster.

Trump's comments encouraging players to join LIV Golf come off the back of 9/11 victims urging the former US President to cancel the LIV Golf Bedminster tournament.

The 9/11 family members and survivors sent a letter to Trump following the conclusion of the 150th Open Championship at St Andrews, which was won by Cameron Smith who has been heavily linked with a move to LIV Golf since etching his name on the Claret Jug.

The letter is the latest in a series of actions taken by the 9/11 community in protest of the Saudi golf league, including an open letter thanking PGA Tour golfers who rejected the opportunity to join the league and a press conference and advertising campaign in Portland ahead of LIV’s first U.S. tournament in June.

In the letter, the 9/11 victims recall President Trump’s 2016 comments on the terrorist attacks, saying during a segment on Fox & Friends: "Who blew up the World Trade Center? It wasn’t the Iraqis – it was Saudi. Take a look at Saudi Arabia. Open the documents. We ought to get Bush or somebody to have the documents opened because frankly, if you open the documents, I think you are going to see it was Saudi Arabia..."

The signees of the letter, members of the non-profit advocacy organization 9/11 Justice, expressed the "extreme pain, frustration and anger" they feel as a result of Trump’s decision to host the next LIV Golf tournament at his golf club in New Jersey in the shadows of Ground Zero.

During a September 11, 2019, meeting at the White House with 9/11 families, President Trump promised to declassify and release key FBI investigative documents related to Saudi involvement in the attacks, but then he failed to do so.

President Biden, however, through his September 3rd Executive Order in 2021, required the U.S. Department of Justice to review and declassify these critical 9/11 investigative documents, which further revealed evidence that makes clear Saudi Arabia’s role in supporting the attacks and terrorism against the United States.

"The evidence against Saudi Arabia and its role in the attacks is more clear than ever and, despite knowing that, former President Trump has accepted their money and is allowing them to enter a state devastated by 9/11," said Brett Eagleson, president of 9/11 Justice and whose father, Bruce Eagleson, was killed in the attacks.

"We are outraged that President Trump would allow this while Saudi Arabia continues to actively conceal its culpability for the 9/11 attacks. As a country we must stand up to Saudi Arabia’s campaign to sportswash its past and remind them that we will never forget."

Eagleson cited FBI documents that outline the Kingdom’s role in the attacks and lay out the details of the numerous connections of U.S.-based "personnel and entities controlled by the Saudi Arabian government" to the al Qaeda terrorist attacks. This includes the FBI’s "investigations and supporting documentation" regarding the religious "militant network that was created, funded, directed and supported by the KSA [Kingdom of Saudi Arabia] and its affiliated organizations and diplomatic personnel within the U.S."

The documents reference Omar al-Bayoumi, a long-serving Saudi government operative who, according to the FBI, "was paid a monthly stipend as a cooptee of the Saudi General Intelligence Presidency [GIP] via then Ambassador Prince Bandar bin Sultan al Saud" and who would obtain information and share it with Bandar for passing along to the GIP. The FBI notes that Bayoumi assisted two of the hijackers in the months leading up to the attacks and "co-signed a lease agreement for the apartment he obtained for the hijackers and brought them to a Bank of America to assist them in opening a bank account."

The letter to Trump also mentions that the FBI has noted that much information has come to light since the 9/11 Commission published its report in 2004 and repeatedly refers in documents to the existence of U.S.-based Saudi “support networks” for the 9/11 hijackers.

The 9/11 families’ letter requests the opportunity to meet with former President Trump so the group can share its specific concerns and urge him to "cease further business with the regime that was complicit in the murder of our loved ones."

LIV Golf has since responded to the 9/11 letter: "As we have said all along, these families have our deepest sympathy. While some may not agree, we believe golf is a force for good around the world."

Next Page: Former Open champion says Cam Smith is definitely in talks with LIV Golf, and his value is now at $100 million