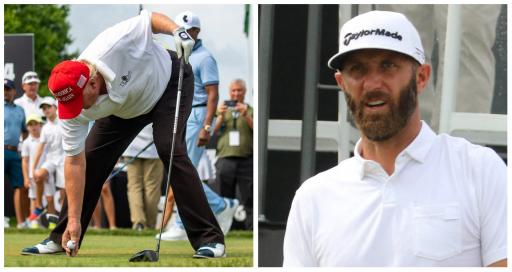 The former President of the United States reportedly rocked up at 10.09am for a 10.00am tee time at Trump National in Bedminster, New Jersey.

According to a report by The Telegraph, Johnson, 45's playing partner, joked: "If it were anyone else..."

Trump reportedly refused to play off the forward tees the amateurs played off in the Pro-Am before the third $25million LIV event.

He also got around the course in a golf cart that was reportedly designed to go twice as fast as a normal one.

Also present was Yasir al-Rumayyan, the head of Saudi Arabia's Public Investment Fund, which is bankrolling the controversial series.

He is also the chairman of Newcastle United in the Premier League. The club was taken over last season.

Trump reportedly hit the fairway with his opening tee shot and told the crowd: "Well, I'm glad that's over with."

Charles Barkley tees off from a forward tee at the LIV Golf Bedminster pro-am (former President Trump teed off from the pro tees FWIW) pic.twitter.com/bPpqE1c8uz

A Wall Street Journal reporter also asked Trump if he was planning announcing his intentions to take another for the White House.

"You're going to be happy," he said of his intentions to announce as the Republican's nominee. "We'll let you know pretty soon."

"It was an honour. Anytime you can play with a president, past or sitting, it's just an honour no matter who it is. I feel very lucky to have a relationship with him and he's always been generous to me.

"[His game] is very impressive. He's a big human being and so he's got that speed. Hopefully I can get him into speed training a little bit. He just hits the ball quickly and he's up and running."

Next page: Tiger has not spoken to me since I joined LIV, says Bryson