The never-ending debate rages on: Should HOODIES be allowed on the golf course!?

We asked our readers what they thought and it's fair to say it's still a hot topic of debate. 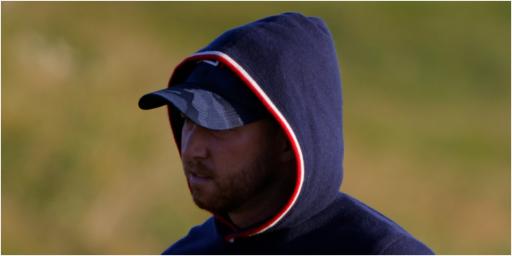 Hoodies. An item of clothing that once would have no business on a golf course. In years past, private members' clubs would have turfed you out had you been wearing one in the car park, let alone in the clubhouse or in the fairways.

But the debate rages on. Should they be allowed? Is it a non-issue? Does the game need to embrace different styles of clothing to recruit and then maintain peoples' interest in the game.

Justin Thomas, Tyrrell Hatton and Daniel Berger have worn them before. And on the biggest stage. Berger had his hood up as he partnered Brooks Koepka at Whistling Straits and looked like something out of Star Wars when he displayed that killer instinct to rip apart the Europeans. Hatton had his up as he cantered to victory at the BMW PGA Championship at Wentworth. JT likes to practice with his on.

There's no doubt that automatically you may think of a hoodie as something you would wear around the house to relax in. But on the golf course? There are standards, apparently. Personally, I don't mind what you wear on the golf course so long as you look presentable. I once worked in a golf club and told a man that deliveries go into the office. Turns out he was from a society. Awkward. But also, he was dressed like he was enjoying a lazy Sunday afternoon on his couch.

We decided to ask GolfMagic readers on our Instagram to see if we could make some progress and settle the debate once and for all. The responses were interesting and included some words that we can not print here. It's sparked passionate responses to say the least.

Here's a pick of the best.

Move with the times, as long as they look smart and the person wearing it feels comfortable, does it really matter?

You can wear what you want but, personally, having tried it, I hate having the hood flying up about my swing.

About time they got rid of the snobbery in golf and there is a lot of it in nearly every club. So long as it's clean, not in tatters and smart who cares.

Sure, on Sunday's in October. With your buddies. Not on the PGA Tour.

Is it okay for your waterproof to have a hood?

Don't care about your outfit, just respect the game.

Golf clubs that don't move with the times will close. Brands are getting braver and forcing it so good on them.

As long as they don't look tacky.

Golf seems perfectly willing to change and move with the times for new technology so why is it so resistant to someone wearing a different jumper?

I've never seen anybody play with the hood up.

MORE: DECHAMBEAU SENDS ONE TO THE MOON AT TOP GOLF

NEXT PAGE: WITB OF JASON KOKRAK?